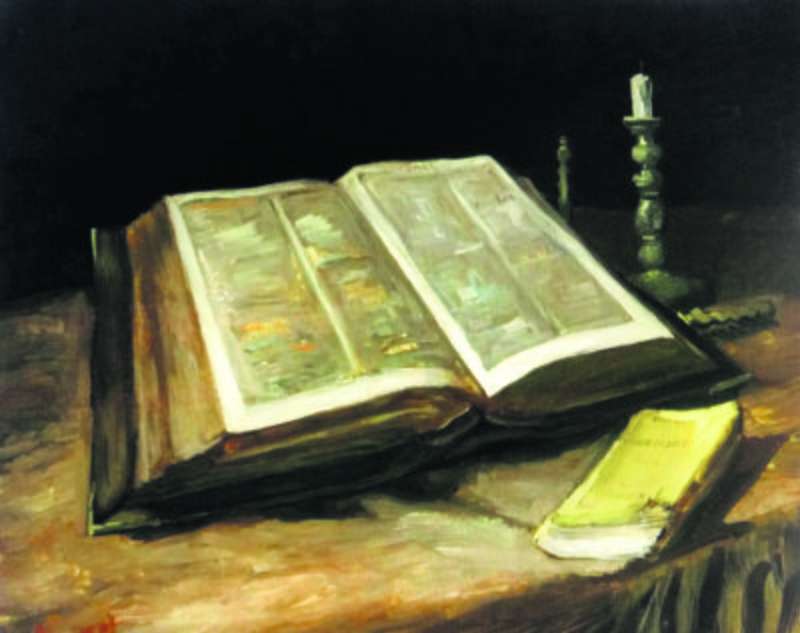 I… made a more or less serious study of the books within my reach, such as the ‘Bible’ and Michelet’s ‘La Révolution Française’, and then last winter Shakespeare and a little Victor Hugo and

— Vincent van Gogh in a letter to his brother, Theo

…you would be mistaken should you continue to think that I have become less keen on, say, Rembrandt, Millet, or Delacroix or whoever or whatever, for the reverse is the case, but there are many different things worth believing and loving, you see — there is something of Rembrandt in Shakespeare, something of Correggio or of Sarto in Michelet and something of Delacroix in Victor Hugo…

— Vincent van Gogh in another letter to Theo

There were many occasions during my virtually annual visits to Zurich when we — my wife and I — would drop in and see Georgette Boner, sister of the far more well-known Alice. Georgette, a theatre professional, lived in an eminently but delightfully disorganised apartment and it was not uncommon for us to see odd pieces — furniture, paintings, crockery among them — lying around. One of the things that caught our eye always was a painting by Van Gogh, never hung on the wall but sitting now on the dining table, now behind a sofa, now resting against a half-open door. It did not look too much like the usual Van Gogh works — richly coloured, full of those characteristic slashes of strokes that almost define his art — nor was on a theme you could easily recognise as his: it showed a bookshelf with a number of books. Some standing, some lying flat, with no titles legible on them: simple, roughly outlined slabs of colour. During one visit, however, we did not see the painting with the bookshelf; it had been taken away by an auction house to which Georgette had sold it.

The unusual — at least unfamiliar to us — subject had always intrigued us, for we, in our ignorance, did not associate Van Gogh, leading his desperately lonely, fractured life, with much reading. It was just recently that I got to learn, through an essay by Steven Naifeh, how much in error we were. For apparently, this great painter was passionately fond of reading, and for him to paint a subject like a bookshelf must have come almost naturally. From his life, one learns that from his ‘earliest childhood’ Vincent was in love with reading. In the simple household of his father, who was a parson, daily reading aloud was a routine, something that ‘set his family apart from the sea of rural illiteracy that surrounded them’. His parents used to read to him almost daily and to their other children; the older children also read to the younger. In his father’s parsonage, reading aloud was used to ‘console the sick and distract the worried’. Long after the children had dispersed, one learns, they continued to exchange books and book recommendations ‘as if no book was truly read until all had read it’.

Considering that his father was a parson, the Bible was regarded as ‘the best of books’, but on the bookcases also lay works of Schiller and Shakespeare in Dutch translation, Moliere and Alexandre Dumas in French. Some writers were out of favour: Goethe was ‘too disturbing’; Balzac and Zola had ‘great minds but impure souls’; Victor Hugo was unacceptable because of his ‘celebration of godlessness and criminality’ — as simple as that. Growing up, Vincent developed a special fondness for Victor Hugo and Zola, however: something that, apart from other things, greatly angered his father. There were arguments, sometimes bitter arguments, between son and father on these matters. When his father died, however, Vincent painted — as a memento or a tribute — the family Bible, a ‘magnificent tome with copper-reinforced corners and double brass clasps’ which he placed on a table, opened its clasps, and rendered from very close. But almost as a provocative reminder of differences with his father, he placed next to it a small French novel, Zola’s ‘La Joie de Vivre’.

Voraciously fond as he was of learning, he kept reading, reading, reading. Privately, he had developed a theory: that ‘certain countries produced the greatest artists in specific art forms’; thus, the Greeks in sculpture, the Germans in music, and the French in literature. He would keep recommending books to his siblings. “This Emile Zola is a glorious writer,” he wrote once to Theo. “Read as much of him as you can.” As he read, he kept absorbing images that great writers created in their works with words. Behind one of his most famous creations, ‘The Starry Night’, for instance, lay somewhere his reading of Maupassant’s words: “I love the night with a passion… I love it as one’s mistress, with a deep, instinctive, invincible love... And the stars! The stars up there, the unknown stars thrown randomly into an immensity…”

Or, perhaps it was Zola’s description of a summer night as ‘powdered with the glittering dust of almost invisible stars… Behind these thousands of stars, thousands more were appearing, …a continuous blossoming, a showering of sparks from fanned embers, innumerable worlds glowing with the calm fire of gems’.

It is not easy to fathom how creative minds work, what processes lie there, hidden from, and beyond, the eye. But a faint glimpse is seen here, I believe. As the writer of the essay on Van Gogh’s love of books, whom I have been quoting, says, there was in Vincent “a spontaneous interweaving of personal preoccupations and artistic calculations, private demons and creative passions, favourite paintings and favourite novels…”

In Vincent’s own words which he addressed to Theo: “Zola creates, but does not hold up a mirror to things, he creates wonderfully, but creates, poetises.”

That is what he himself was doing in his own work: ‘poetising’ — both sights and thoughts.