Warrior chronicler of the country’s bravehearts

85-year-old Shyam Kumari has an unusual passion — documenting the soldiers who died for flag, nation and honour 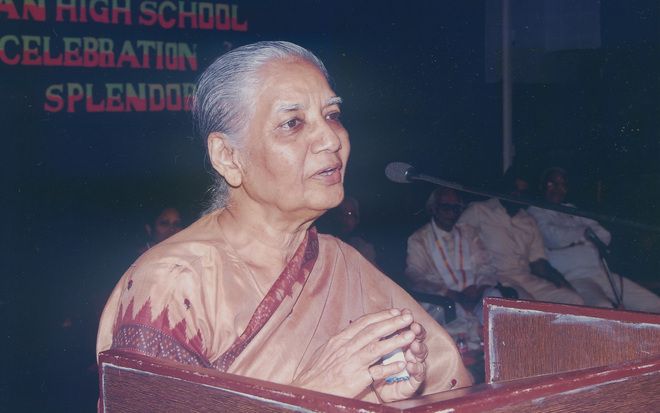 India’s armed forces have legions of well-wishers and one of the most committed and passionate amongst them has to be Shyam Kumari, based in Aurobindo Ashram, Pondicherry. The soft-spoken but feisty 85-year-old writer and activist voices her love and respect for the sacrifices that soldiers make with a facile pen and with professional depth, deep research and understanding about their deathless deeds.

I am a veteran, war-wounded soldier myself. Post retirement in 2006, I willingly joined a small, informally-structured band of volunteer officers who have chosen to invest quality time in ‘passing on’ to the young, the willing and the interested, the core values that make our armed forces amongst the finest in the world.

It was in pursuit of such activities that I came in touch with her courtesy a retired war-decorated General, Maj Gen Ian Cardozo, Vir Chakra — famous for amputating his mine-blasted leg with his own khukri because it was impeding him from completing his military mission. “This lady is something else; she has such fire and passion for the feats that soldiers do for flag and country. She is an inspiration,” he said.

Both Gen Cardozo and I had gone to participate in a ‘Military Heroes Commemoration Parade’ event in Jhansi, UP, set up by Shyam Kumari through local volunteers. At that stage, my acquaintance with her was restricted to emails, with her sitting in faraway Pondicherry. She has serious chronic physical disabilities that do not allow her to walk for any great distance. “I have never left Aurobindo Ashram since I arrived 50 years ago,” she says. However, that has not deterred this spirited lady from superbly executing her self-appointed charter of honouring soldiers and soldiering through such commemoration parades all over India.

One co-participant in this function was Honorary Captain Bana Singh, PVC, whose stunning feat of arms in the icy fastnesses of Saltoro Ridge overlooking Siachen Glacier gave the Pakistani Quaid Post to India; being re-named by a grateful Army as Bana Top after its capture. The parade had the war heroes drive through rapturous crowds lining the selected route in a city famous for India’s darling woman braveheart — Laxmi Bai, Rani of Jhansi. The function culminated with a public reception under the shadow of the famous fort from where the daring Rani is believed to have made her escape from the British forces besieging Jhansi during India’s First War of Independence in 1857.

Shyam Kumari was born in Muzaffarnagar, Uttar Pradesh, in 1934. A Masters from Lucknow University, she is widely read in Hindi and English literature and in spirituality. In 1969, she was appointed as a teacher in the Sri Aurobindo International Centre of Education, Pondicherry. Her forte is, of course, her remarkable ability and passion to write about India’s military heroes, a feat unique in the world of penmanship. An established author, her poems, lyrics, stories, plays, literary and social essays, both in English and Hindi, have appeared in national and international journals. She has written and published more than 60 books, some running into several reprints. Of these, over 20 are on Army war heroes. Nine of her popular books are on Param Vir Chakra heroes, with several now on the writing board. These are priced at ridiculously low rates and are of 40 to 60 pages each.

Her books have been translated into Hindi, Oriya, Tamil, Bengali, Marathi, Gujarati and Russian. She has also written pathbreaking rhymes and children’s story books. In 1998, she launched a Hindi quarterly magazine, ‘Swarna Hansa’. She has also launched innovative schemes, one of which encourages schools to adopt a war hero and try and live by the values that he or she exhibited in executing their great feat of arms. Another scheme calls for honouring the families of martyrs at schools and emulate their values thereto.

Shyam Kumari has also set up the Sri Aravinda Sanskrit Vidhyalaya as a labour of love and nurtured it these last 21 years.

Having helped spread the word about this amazing, dynamic person, I was delighted, when, last year, I was invited to deliver a talk at Pondicherry University. I finally met this powerhouse of energy and selfless devotion and happily acceded to her request to lecture school and college children on the subject of becoming global Indians across gender and age.

Courtesy her facilitation, I also spent a delightful two hours interacting with some really bright children from all over the world studying at Sri Aurobindo International Centre of Education. The audience covered the entire gamut from playful third-graders to post-graduates and PhD candidates; all sitting in the same hall and with full freedom to walk out if the talk bored them. Instead of feeling stressed, I realised how great the privilege of speaking to them was and enjoyed my friendly chat. More importantly, I understood the genesis behind what makes Shyam Kumari so committed to her calling of making people aware of what greatness is, and developing the skill-sets to reach there with passion and pride.

The sub-text cannot be missed out. It is that the most powerful tool for a person to succeed in his/her calling is hidden deep within that person. In real terms, invest in yourself, believe in yourself, trust yourself, drive yourself; awaken the powerful ‘God' within you; make yourself your best friend and you have the soldiers’ timeless credo with you — ‘God is within you,’ as Buddha and Vivekananda often exhorted their listeners.

It is in this context that I find Shyam Kumari truly world class. She exhibits infectious belief in her calling, sets standards, dares young people to dream big and then develop the skill-sets needed to achieve ‘impossible’ dreams. Join her!