On the occasion of World Water Day, it’s time to take stock of the groundwater woes of Punjab, the state that spearheaded the Green Revolution. Direct sowing of paddy, laser levelling and scheduling of irrigation are techniques of energy/irrigation water-saving, not real water-saving. Groundwater can be saved either by shifting the starting date of paddy transplantation towards the low evaporative demand period or diversification with crops having lower water requirements. 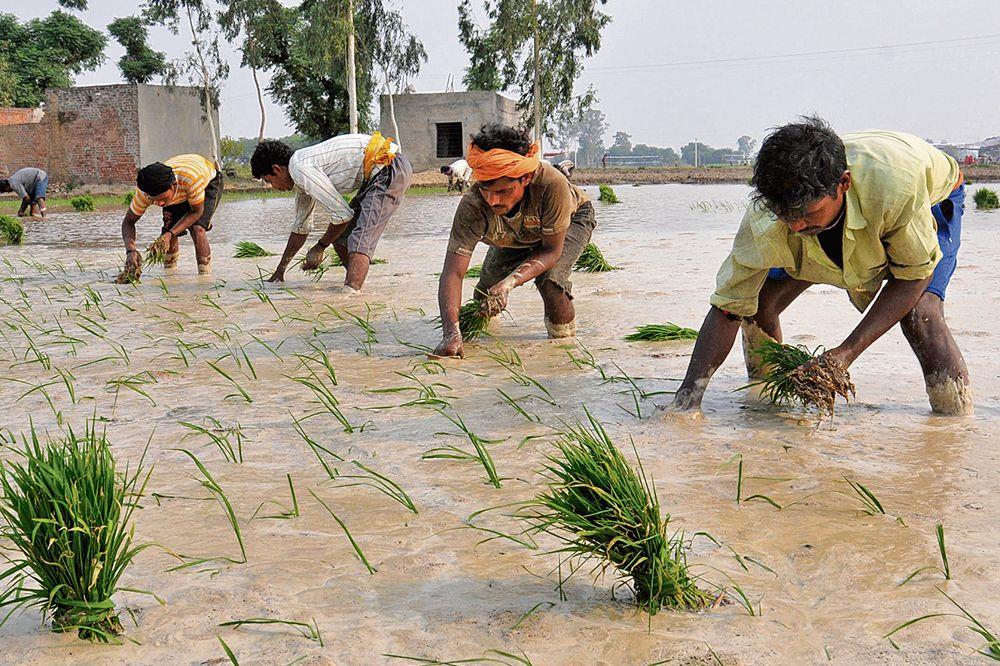 Paddy, a water-guzzler, was never a crop of Punjab, Haryana and western UP.

Paddy, a water-guzzler, was never a crop of Punjab, Haryana and western UP. However, in order to ensure food security of the country, paddy cultivation was encouraged in the region by policy-makers. This is reflected in the steady increase in the minimum support price (MSP) of paddy over the years. Initially, paddy cultivation started in areas with waterlogging conditions, which occurred after the introduction of canal water irrigation projects in this region. Later, large-scale paddy cultivation was taken up with tubewell irrigation because of groundwater availability at a shallower depth. The higher yields coupled with higher MSP led to large-scale adoption of paddy cultivation in Punjab, thus ushering in the Green Revolution which made the country self-sufficient in foodgrains. But at the same time, the mining of large quantities of groundwater led to a rapid fall of the water table. A related problem is the increased cost of electricity for pumping out groundwater.

Irrigation methods, scheduling of irrigation, laser levelling, direct sowing of paddy, etc. are techniques of energy/irrigation water-saving and not real water-saving. These techniques have little or no impact on the water table. Groundwater can be saved either by shifting the starting date of paddy transplantation towards the low evaporative demand period (June-end to early July) or diversification with crops having lower evapo-transpiration water requirements.

Artificial recharge (AR) is accepted worldwide as a cost-effective method to augment groundwater resources in the areas where continued overexploitation without due regard to recharging options has resulted in undesirable environmental consequences. The cultivation of water-guzzling paddy has wreaked havoc on the water table in states such as Punjab and Haryana.

During the 1970-80s, paddy was grown from July to September. Till 1985, the starting time frame recommended by Punjab Agricultural University (PAU) was the first fortnight of July. But in reality the farmers were transplanting as early as May. It was established by PAU scientists that the rapid slide in the water table could be arrested by delaying the onset of paddy transplantation to June 10/15/20. To implement this practice, the Punjab and Haryana Governments separately passed the Preservation of Subsoil Water Act in 2009. Since then, the process of delaying paddy transplantation is by and large being followed in Punjab. Even the eight-hour regular electricity supply to tubewells was provided from June 10 onwards only. The Punjab Government passed an ordinance in 2008 not to allow paddy transplantation before June 10.

Transplantation was put off to June 10 in 2009, June 15 during 2014-17 and June 20 in 2018. However, it was advanced by a week in 2019 in anticipation of straw-burning (witnessed in October-November) and to June 10 in 2020 because of labour shortage caused by the Covid-induced lockdown. The date was advanced in 2019 on the plea that due to late harvesting, there is little time to manage straw. Somehow, it did not help in checking the menace of straw-burning, which is attributed to two reasons: cultivation of long-duration varieties such as Pusa44 and Peeli Pusa which have huge biomass; and the specified sowing time of the nursery in Clause 1 of the Subsoil Water Act. This was done keeping in mind the 30-day-old nursery to be the ideal age for transplanting. As per the Act, the government has notified: no sowing of nursery before May 10; no transplanting before June 10.

In view of Clause 1, the long-duration paddy varieties stay for longer periods in the field and are harvested from mid-October to mid-November. The sowing of wheat starts in the first fortnight of November. Accordingly, the farmers were allowed to advance paddy transplanting to June 10 from June 20. Shifting paddy transplantation from June 10 to June 20 saves 6 cm water. On an average, it will arrest the fall in the water table in Punjab by about 30 cm per year and save electricity worth Rs 500 crore for pumping out groundwater.

Based on discussions with farmers and a perusal of the PAU Package and Practices (2013), it can be inferred that medium and long-duration paddy seedlings can be transplanted up to the age of 55 days. Field experiments were conducted during 2020 with PR128 (newly released by PAU); the seedlings, transplanted at an age of 44 days, yielded 40 quintals/acre. Pusa44, transplanted with 34- and 42-day-old seedlings, yielded 37 and 39 quintals/acre, respectively. However, it stayed 15 days longer in the fields than the PR128 variety. Varieties PR124 and PR129 with 33-day-old seedlings at planting matured 10 days earlier than PR128 and yielded 33.5 and 36 quintals/acre, respectively. Field experiments conducted during 2014 and 2015 on Pusa 44 and PR124 varieties showed that there was an increase in the yield by 22% and 7%, respectively, by delaying the date of paddy transplantation and a higher age of the nursery.

Paddy prefers reduced soil conditions (low oxygen) and hence should ideally be grown only during the monsoon season. Harvesting should start from October 1 and be completed by October 31. Farmers will achieve this objective on their own by simply transplanting the older seedlings. This would be possible only if the restrictions on nursery sowing are removed. However, the date of commencing transplantation of paddy — June 20, and at a later stage, June 25 — should be strictly followed to save groundwater and the cost of pumping out water.

PAU is advocating the sowing of short/medium-duration varieties. It provided seeds of the high-yielding, medium-duration variety PR128 to farmers during 2020. It may, however, take some years to replace Pusa44. This year, the start of transplanting should be stipulated from June 15. This date may be shifted to June 25 within 4-5 years.

The Subsoil Water Act should be revised so that it reads: “No transplanting of paddy before June 20.”