When a trek goes wrong 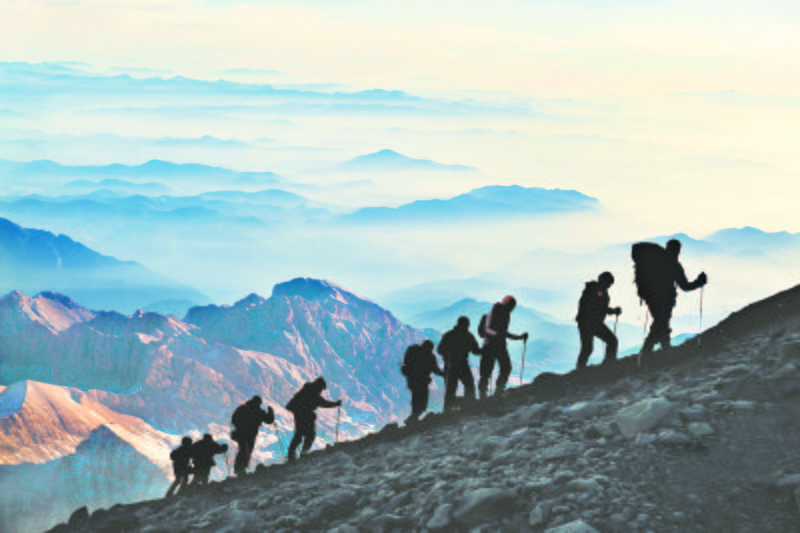 “It was a simple trek that went wrong,” says Ashutosh Mishra about the recent trekking deaths at Lamkhaga Pass (5,300m). The pass starts from Chitkul village of Sangla valley in Kinnaur (Himachal Pradesh) and connects with Harshil in Uttarakhand. In October-end, the pass claimed the lives of 11 trekkers. “Bad luck compounded with bad weather and hasty decisions by inexperienced trekkers in sheer panic did them in,” adds Mishra, co-founder of Snowscapes and a consultant with the Indian Mountaineering Foundation (IMF), the apex national body for mountaineering and allied sports that promotes and regulates national and international climbing and mountaineering in India.

This sums up the general mountaineering scenario in the country, much of which is unregulated, and has claimed several lives. Twenty-two died in Uttarakhand alone in October.

IMF member Maninder Kohli, as part of its Risk Management Unit, has been investigating trekking and mountaineering mishaps since 2018 and formulating advisories based on that. “Rustic approach by the unorganised sector has emerged as a major worrying factor. A report on the Lamkhaga tragedy shows that a weather alert may have been ignored or misinterpreted. An experienced person would not have proceeded,” adds Kohli, son of legendary mountaineer MS Kohli, leader of India’s first successful Everest expedition. “According to the report, the bodies were found scattered all over. It shows a lack of ability to take evasive action,” he adds. 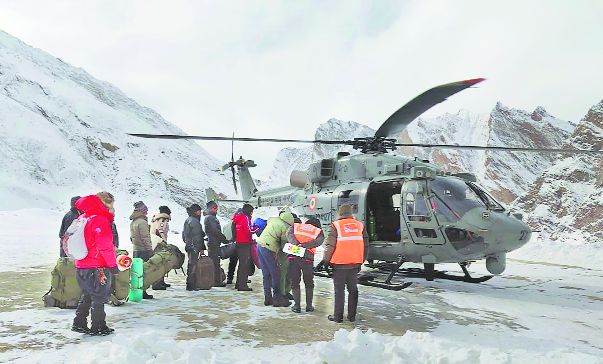 An account by Tulsi Kafle (20), a young porter who accompanied the Lamkhaga group, corroborates that. “We reached the pass at 4 pm on October 17 and started descent at 5.30 pm. Two persons had a fall and were injured. The guide told us to abandon some load and carry them. In haste and confusion, we unloaded random stuff that may have included essentials like food, fuel and some tents. Around 7 pm, we had to stop because of the worsening weather. We pitched a tent for the group and then proceeded down to inform the authorities. I later came to know that three-four trekkers tried to follow us. Their bodies were later found,” says Kafle, a local guide. It was his first trip to Lamkhaga and he admits to not knowing the “rasta” fully.

A major problem this year, says Ankit Sood, co-founder, Sunshine Himalayan Adventures, Kullu, and an ecotourism consultant with the Himachal government, was that the season started late. Cooped up indoors for two years — and after an especially deadly second wave of Covid-19, when things finally opened late summer this year, people from the plains made a beeline for the hills. “Trekking, in fact, started in late September/October. Around this time, the Gaddis retreat from the high mountains because there is chance of early snowfall. Even simple treks are not possible at the time, but trekkers go ahead, forgetting that the weather is unsparing,” he says.

Chandan Sharma, director of Up North, a trekking agency in Kullu, is pained at seeing “the most beautiful activity” of trekking take lives for reasons that don’t have any merit. He says most youngsters land at the Himalayas after seeing social media influencers. “A random guy puts up a DIY trekking video, and these guys find themselves making steep ascents totally unprepared, without guides, without any knowledge of the terrain or weather patterns. Something goes wrong, and you have nowhere to stay, nothing to eat,” says Sharma, who has been into the business for 23 years now. A guided trek, on the other hand, would have studied the route, have a guide who has been up and down that track hundreds of times and have a rescue plan.

Over the last decade, a lot of adventure companies have come up in IT hubs like Bengaluru, targeting young professionals. Locals say that these companies, by the virtue of their base not being here, may not turn out to be the best bet for a trek up North. “While we don’t recommend more than 12 persons, groups today include 30-plus. Will they hire as many guides? No.”

Based on his 25 years of high-altitude trekking, ex-IAS officer Avay Shukla says that in most cases, the trekkers themselves are to blame. “They don’t realise that trekking in the mountains is not a casual affair and needs careful preparation as it concerns training, fitness, equipment, scheduling and knowledge of the terrain.” Agrees Chhape Ram of Negi’s Himalayan Adventure Search Rescue & Investigation Team, who has, over the last 40 years, rescued hundreds of stranded tourists as well as police and Army personnel in Kullu valley. The only thing that he finds fault with: non-compliance of basic trekking rules. “You cannot trek with hands in your pockets! In case of a fall, hands get locked in the pocket. I have seen so many bodies like that,” he says.

Many also consume alcohol, and sometimes drugs, on treks. This, says Aditya Gupta, a seasoned mountaineer who scaled Mt Everest in 2019, besides other tough peaks, should be avoided at all costs as alcohol plus high altitude dehydrate the body and can affect orientation.

Reena Kaushal Dharmshaktu, OSD, Pandit Nain Singh Surveyor Mountaineering Institute, Munsyari, Pithoragarh, who has been mountaineering for more than 25 years, too, attributes the increasing accidents to callousness towards nature. “The weather warnings should be taken seriously since once you start trekking, you are entirely on your own,” says Reena, who is the first Indian woman to ski from the coast of Antarctica to South Pole. It is the responsibility of those conducting these tours to prepare the trekkers with outdoor survival skills, besides identifying the camping places on the way, adds Reena, who has led several expeditions in the Himalayas.

“Everyone wants a short cut these days,” says her mountaineer husband Love Raj Singh Dharmshaktu, who has scaled the Everest seven times. If reaching a padav (camp site) takes say around eight days, they want to wind it up in five days, says the Padma Shri awardee. Since most of the planning for trekking trips is done in AC rooms in metro cities, the time which the body needs to acclimatise is not kept in mind, he says. So when you actually get down to trekking, the body can refuse to cooperate. Last but not the least, get yourself insured. “A basic trek can cost between Rs200 and Rs300 per day, but it will be of immense help in case you get stuck and require helicopter assistance, which can otherwise be an expensive affair,” says Love Raj Singh, an Assistant Commandant with the BSF.

According to Col Amit Bisht, principal of the Nehru Institute of Mountaineering, Uttarkashi, who led a team of instructors to Mt Everest in adverse weather conditions this year, many confuse the GPS tracking chip as a safety measure. “The GPS trackers are merely helpful in tracing the trekker’s location in case of an emergency but these can’t help in communicating when you need help the most,” he says.

On why not to cut costs, Colonel Bisht, who won the Tenzing Norgay National Adventure Award 2020 recently, says: “The Kedarkanta Trek, which usually takes five to six days, can cost between Rs1,500 and Rs15,000. Even if you are not taking the minimum package, and opting for a mid-range package, there will still be compromises.”

While Kohli proposes that unregistered, low-cost operators should not be allowed expeditions beyond 5,000m, Sidhu says the government should allow provision for satellite phones and import of high-quality mountaineering equipment at subsidised rates. “The IMF should aggressively market its facilities. They provide high-quality, safety gear at very reasonable rates but most trekkers may not be aware of it. Also, the process to go about it is quite long-winding. They also need to have visible presence at all mountaineering sub-centres,” he says. However, since technology can’t be trusted, Mishra suggests standardised advisories for every trek.

The need to regularise the industry is what all insist on. Chandan Sharma says that the adventure tour operators in Kullu are now working with the administration to formulate regulations to avoid accidents. This could entail permissions to go trekking, maintaining a record of trekkers and open treks as per season. Avay Shukla has, for long, also been advocating involvement of the Forest Department as all trekking happens in forest areas.

The recent spate of deaths has forced the HP government into action. The Information Technology Department has already been directed to design an app with which every trekker embarking on a journey will have to register, says Amit Kashyap, Director, Tourism, and Managing Director, Himachal Pradesh Tourism Development Corporation. “All the DCs have been asked to identify the trekking routes and zones in their jurisdiction and inform by November 10. Trekkers will have to inform the Sub-Divisional Magistrate concerned about their trekking dates along with their mobile numbers.”

However, the most important factor, experts insist, will always remain hiring a professional guide, preferably local. “An experienced guide is familiar with the area’s terrain, local routes, natural shelters and knows which signs to watch out for in case the weather turns bad suddenly. Unfortunately, most trekking parties pay little importance to this and at times venture out on their own,” adds Shukla. Sharma feels an advantage of going with a local guide is also that in case he doesn’t return home at the expected hour, his family can sound an alert.

The onus is also on trekkers. “Whether first-timer or experienced, never cut costs as it is the cheapest holiday anyway. If people can pay Rs15,000 a night at a resort, why not invest in good equipment, experienced guides, medical aid, etc? Let’s not take this fun activity so casually that it becomes a casualty,” says Gupta, an advice that needs to be taken seriously.