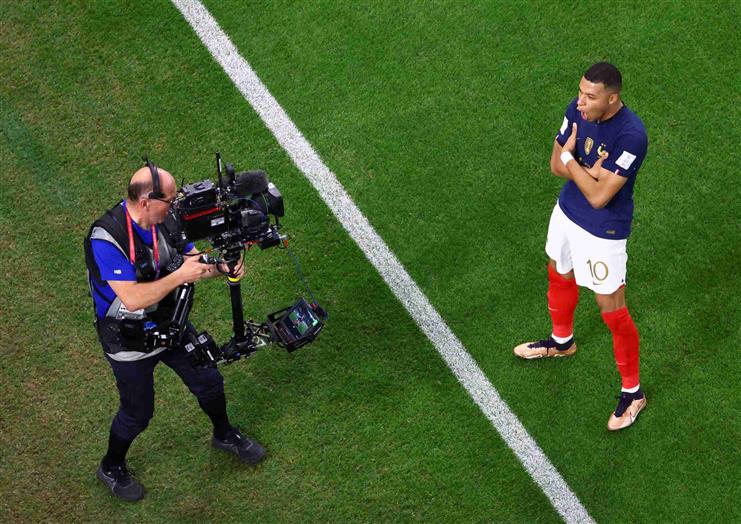 Kylian Mbappe was in another league yet again, while the ever-reliable Olivier Giroud netted a record goal, to send defending champions France into the quarter-finals of the World Cup with a 3-1 victory against Poland on Sunday.

Les Bleus, who will face either Senegal or England for a spot in the last four, had to dig deep but scored on the stroke of halftime as Giroud became the outright all-time scorer for France with 52 goals before Mbappe's 74th-minute and stoppage-time screamers sealed Poland's fate.

Poland, in the knockout stage for the first time since 1986 and looking for a first quarter-final appearance since 1982, had a huge chance in the first half but the France midfield did a great job at cutting the feeding line to Robert Lewandowski, who reduced the arrears with a twice-taken, last-second penalty.

Keeper Hugo Lloris made his 142nd appearance and is now tied with Lilian Thuram as France's most-capped player, and his experience mattered when he made a superb quick save to deny Piotr Zielinski.

Coach Didier Deschamps had warned that there was more to Poland than Lewandowski and he was proved right at the Al Thumama stadium as the French were at times shaky at the back.

"It's not been easy because they're a well-organised team and we had to make some positional changes at halftime," said Deschamps.

"We're a united squad and tonight the players' impeccable behaviour has been rewarded. Now we're going to spend a little bit of time with our families." France got off to a dominant start before abandoning possession, looking to create space in the back of the Polish defence after Mbappe's first forays failed to lead to clear chances.

Poland's poise came close to being rewarded in the 38th minute when the onrushing Zielinski's shot was parried by Lloris. It then came back into the midfielder's path but his second attempt was deflected by Theo Hernandez.

Jakub Kaminski followed, only for his shot to be saved close to the goal-line by Raphael Varane.

"We fought, we created a couple of chances, some really clear ones, especially in the first half; it’s a pity nothing went in," said Lewandowski.

One minute from the break, however, France's tactics paid off.

Mbappe drew the defence to him and slid the ball through into the path of Giroud, who grabbed the inch of space he needed to clip the ball past Szczesny and net his third goal of the tournament.

The 36-year-old Giroud, who did not score in Russia four years ago, had drawn level with Thierry Henry on 51 goals after netting a double in the defending champions' 4-1 win over Australia in their opening Group D game.

France looked too casual, however, especially Mbappe, but the forward came up with a spine-chilling rising shot that went under the bar before curling another jaw-dropping shot into the top corner one minute into injury time.

They were his fourth and fifth goals in Qatar, and Mbappe became the first player to score nine World Cup goals before his 24th birthday, having netted as many as Argentina's 35-year-old Lionel Messi.

It helped Mbappe to erase painful memories from last year's European championship, when he missed the decisive penalty that sent Switzerland into the last eight after a shootout following a 3-3 draw.

A handball by Dayot Upamecano gave Lewandowski a chance of scoring a consolation goal with a penalty that was first saved by Lloris before being retaken -- and scored -- as the keeper did not have his feet on the line. Reuters