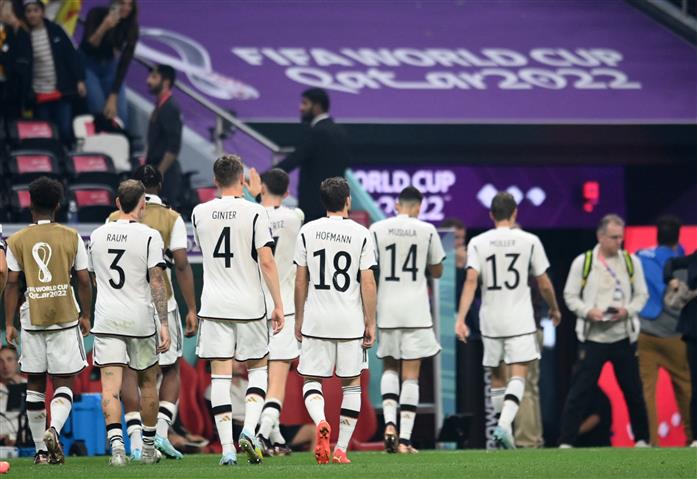 Germany players look dejected after the match as Germany are eliminated from the World Cup. Reuters

Germany defeated Costa Rica 4-2 in their concluding Group E match of the FIFA World Cup but that was not enough for Die Mannschaft to qualify for the knockout stage of the tournament.

At the Bayt Stadium in Al Khor what went against the four-time champions was the match result from Group E's other finale between Spain and Japan at Khalifa International Stadium, where Japan defeated the European giants 2-1 to make it to the next stage as group winners.

Germany's exit meant they crashed out of the world at the group stage for the second successive time having suffered the same fate at Russia 2018. Costa Rica was also eliminated, with Japan and Spain moving on.

Germany's simplest path to the knockout stage was a win over Costa Rica coupled with a Spain win over Japan, but it also would have advanced with a Spain-Japan draw after its multi-goal win. Japan's 2-1 win over La Roja spelled elimination for Die Mannschaft, which had an uphill road to climb after its upset loss to Japan in the opener.

Spain had started their Qatar campaign with 7-0 drubbing of Costa Rica and followed it up with a one-all draw with Germany and finished with a 2-1 loss to the Asian side.

Germany dominated Costa Rica in the first half, with Serge Gnabry giving Germany a 1-0 lead in the 10th minute with a glancing header off a cross from David Raum. Manuel Neuer, making his World Cup record 19th start in goal, denied a close-range shot by Costa Rica's Keysher Fuller just before the break.

Costa Rica, which needed a win to advance, scored the equalizer - the first of five second-half goals between the teams - in the 58th minute, when Yeltsin Tejeda buried a rebound into the back of the net. Juan Pablo Vargas gave Los Ticos a 2-1 lead in the 70th minute, but Germany's Kai Havertz answered with the first of his two goals three minutes later. Niclas FÃ¼llkrug provided the final tally.

Germany's failure to advance for the second straight World Cup is a remarkable fall for a national team that won the event in 2014, finished third in 2010 and 2006 and was the runner-up in 2002.

On Thursday, both Group E and Group F had surprising group winners. Group E champion Japan will face Croatia in the round of 16 on Monday. Group F winner Morocco will face Spain on Tuesday.

The World Cup continues Friday, when the round of 16 will be set after the finales in Group G and Group H. IANS