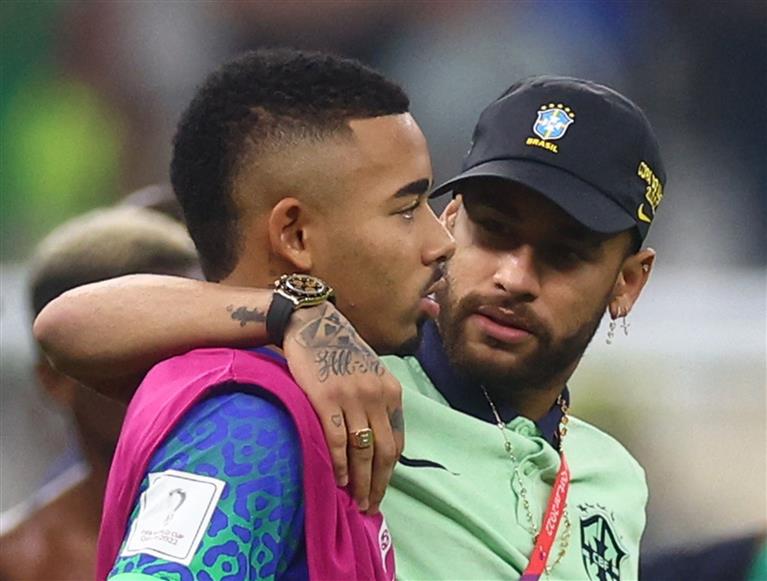 Brazil’s Neymar, right, with Gabriel Jesus after the Group G match against Cameroon at the Lusail Stadium in Lusail, Qatar, on December 2, 2022. Reuters

Injured forward Neymar was at Lusail Stadium on Friday to watch Brazil’s 1-0 loss to Cameroon at the World Cup, and was expected to start training with the ball again on Saturday.

It was the first time Neymar joined his teammates at a match since injuring his right ankle last week in Brazil’s opener against Serbia.

Neymar was not limping as he got off the team’s bus at the stadium and appeared to be in good spirits. He talked to teammates as they warmed up on the field and even played with the ball by the sideline.

Team doctor Rodrigo Lasmar sounded optimistic about Neymar’s recovery after the match, but said it was too soon to know if he would be available for Monday’s game against South Korea in the round of 16.

Left back Alex Sandro, who is nursing a hip injury, also will train Saturday.

“They will work with the ball on the field tomorrow (Saturday) and we will see how they respond,” Lasmar said.

Neymar was the only player who stayed at the team hotel during the match against Switzerland on Monday. He had stayed behind undergoing treatment for damaged ankle ligaments.

Right back Danilo also didn’t play against Cameroon because of an ankle injury, but Lasmar said he would train normally with the rest of the group on Saturday and was closer to becoming available for the game against South Korea.

Neymar was shown by the Brazilian soccer confederation earlier Friday doing drills with a ball at the team hotel. He had physiotherapy treatment in a pool Wednesday. Danilo and Alex Sandro practiced separately at the team’s training center Friday.

Neymar injured his back in the quarterfinals against Colombia during the 2014 World Cup in Brazil and missed the rest of the tournament. He also missed the 2019 Copa America because of another right ankle injury.