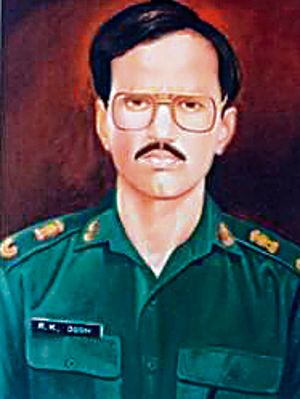 Captain Rajiv Joon was born at Gaddhi Kheri village in Rohtak district on December 5, 1969. His father Ch Dharam Singh died when Rajiv was not even in his teens. His mother Shanti Devi single-handedly raised him and his four siblings. While studying at Sir Chhotu Ram Memorial Public School, Rohtak, the adolescent Rajiv saw his maternal uncle (mausa ji) — Brigadier Kaptan Singh Kataria — in uniform and was fascinated by his soldierly aura and got infatuated with his olive greens and the glittering medals and ribbons on his left breast pocket.

After primary, Rajiv joined Sainik School, Kunjpura (Karnal), where his love for the olive greens blossomed. After senior secondary, he went on to join the prestigious National Defense Academy, the best tri-services academy in the world and was commissioned into the 22 Grenadiers on June 8, 1991. The 22 Grenadiers, also referred to as 'Ashok Chakra' battalion, is among the very few battalions in the Indian Army that have two or more Ashok Chakra (the highest peace-time gallantry award) winners on their roll of honour.

While in the battalion, Rajiv was quick at uptake and soon learned the nuances of counter-insurgency operations. Even as company officer, he always volunteered to lead cordon and search operations to nab militants.

Militancy in Jammu and Kashmir was at its peak, when the 22 Grenadiers was inducted into the Kashmir valley. The battalion was tasked to operate in Pulwama district. Incidentally, Pulwama district, east of Pir Panjal in the Kashmir valley, despite being nowhere near the Line of Control (LOC), had been engulfed in militancy since the time it raised its ugly head in the Valley in the late '80s. Having taken the heaviest toll on the security forces on February 14, last year, Pulwama district still remains the hot bed of militancy in the Valley.

Within a short period after its induction, the 22 Grenadiers made its presense felt in Pulwama district by a series of successful cordon and search operations. During its entire tenure in Jammu and Kashmir, the 22 Grenadiers remained thickly involved in successfully raiding militants' hideouts one after another forcing them either to surrender or remain in hiding till frustration. During one such search and destroy operation, Captain Rajiv Kumar Joon of the 22 Grenadiers, for his exemplary courage and gallantry of a high order, was awarded the Shaurya Chakra.

Brigadier Randhir Singh, who commanded the 22 Grenadiers during its counter-insurgency operations in the Valley recalls: "Rajiv was unassuming and a man of few words. But during operations, he was a live wire wherein his actions spoke volumes. He always volunteered to encounter militants and his jawans followed him blindly." Haryanvis are like that, faujis in particular.

“On April 16, 1994, a reliable civilian informer brought the news to the battalion headquarters that after crossing over the Pir Panjal the previous night, some militants were hiding in Thiarin village. After dusk, they would leave the village and head towards Srinagar. Immediately, Captain Rajiv Kumar Joon, the officiating company commander of B Company of the 22 Grenadiers, was tasked to raid the suspected hideouts in Thiarin village in Pulwama district of Jammu & Kashmir to nab or eliminate militants. As the raiding party approached the hideout, two militants fired and tried to escape taking advantage of thick vegetation. Capt Joon, with disregard to his safety, outflanked and sealed off the route of escape of militants. As a result, militants got trapped in a nearby nullah but took cover of the boulders and started firing. Undeterred, Capt Joon further closed in and finally charged at and killed both militants and recovered one rifle along with ammunition. During the second phase of the same operation, Capt Rajiv Kumar Joon combed Thiarin village in seven prongs. Having seen some suspicious movements, he ordered his support group to give him covering fire and along with his buddy, he dashed towards thick jungle. Despite grave danger to himself, Capt Joon, along with his buddy, chased the group of militants. Though badly hit on the thigh, he did not abandon the chase and despite a volley of fire from militants, finally assaulted the militants' group and killed three more hardcore militants and injured one. Captain Joon with serious wound on his thigh got himself evacuated to the hospital only after the successful raid, in which five hardcore militants including a dreaded self-styled Company Commander of Hizbul Mujahideen were killed and one injured. During the operation, Captain Rajiv Kumar Joon displayed bravery, courage and devotion to duty of a high order, for which he was awarded the Shaurya Chakra."

Recipient of Ashok Chakra too