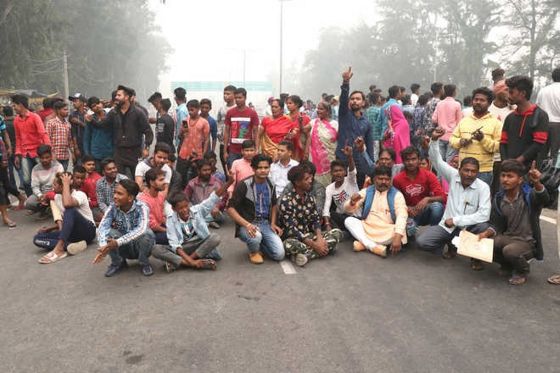 More than 100 migrant workers employed in local factories blocked the Kurukshetra-Yamunanagar road here on Monday morning, demanding they be sent to their villages.

The police had to use mild force to disperse the agitators near Jaudiya naka after they pelted stones, damaged a police motorcycle and injured two cops. “Several workers blocked the road and resorted to violence following which the police resorted to mild force to disperse the agitators,” said Chamkaur Singh, spokesman of Yamunanagar police. Chamkaur Singh said on the complaint of Constable Sanjeev Kumar, a case was registered against unknown persons under Sections 148, 149, 332, 353, 186, 188, 341, 323, 269, 270, 427, 506 and 120-B of the IPC at Farakpur police station.

Sanjeev Kumar said he and special police officer Ramesh Chand were posted on rider number-16. While performing their duty, they found that some people had blocked the road near Jaudiya naka. “When we asked the protesters to lift the blockage, they started beating us with sticks they were carrying. They also slapped us and threatened us with dire consequences. Besides, they damaged our rider motorcycle,” the complainant said. He said that after getting information, when PCR number-5 reached the spot, the agitators started stone-pelting.

However, the workers said they wanted to go to their homes because they didn’t have work and were unable to fend for themselves. “The government has done nothing to send us home, therefore we had to come out on the road,” said a worker. “The local administration is helping all needy persons and taking care of them. If anyone has a problem, he/she should contact to the administration. No one will be allowed to take the law into their hands,” said Farakpur SHO Mukesh Kumar.