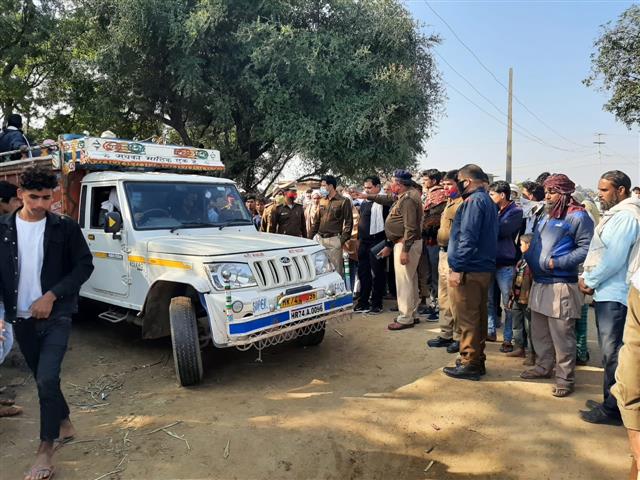 The police at the village in Nuh.

A woman is believed to have slit the throats of her four daughters before trying to kill herself in Piproli village in Haryana’s Nuh, police said on Friday.

A complaint from the woman’s husband, Khurshid (38), said he returned home in the early hours of Thursday to find his wife, Farmeena, lying in a pool of blood writhing in pain, while his three daughters--- Muskan (6), Miskina (4), Alshifa (3), and four-month-old Arbina--- lay nearby with their throats slit. The woman is alive but critical, and is currently undergoing treatment at that Shahid Hasan Khan Hospital, Nuh Superintendent of Police Narender Bijarnia said.

Police said Farmeena has a daughter from a previous marriage whom Khurshid had sent away to her maternal uncle a month ago despite his wife’s objections. Farmeena is also believed to have accused her husband of threatening to kill her, police sources said.

The couple have been married for eight years.

Police said she has been booked for murder.

Vivek Chaudhary, Deputy Superintendent of Police, Punhana---the tehsil that the village comes under---said Khurshid had blamed his wife’s action on the lack of a male progeny---an angle police are now looking into. He also said a kitchen knife was used to slit the children’s throats while they were still asleep.

“We are speaking to family and neighbours who are hinting at frustration of not bearing a male child as the key motive,” Chaudhary said.