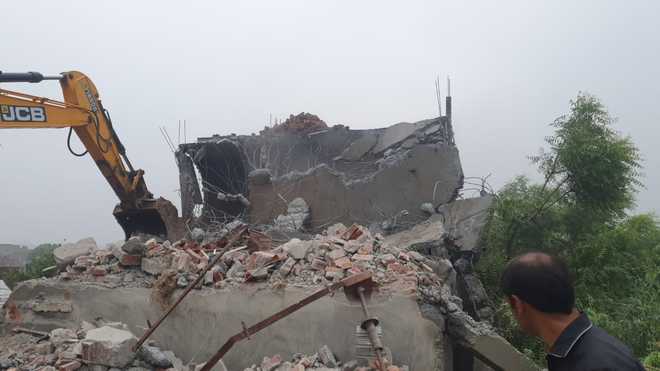 An illegal structure being razed at Khori village on Tuesday. Tribune photo

The demolition drive that was halted due to heavy rain on Monday was resumed on the seventh day today at Khori Gaon Colony, resulting in the razing of 600 structures.

The Municipal Corporation Faridabad (MCF) has demolished around 3,300 constructions, out of the total target of around 10,000 houses spread over 172 acres of forestland so far, according to sources.

Officials concerned are, however, tight-lipped over the number of demolitions so far. Sources said that a majority of the residents whose houses had been razed had still been staying there with the hope that their chances of getting compensation or an offer of rehabilitation in near future were not lost.

“The demolition will continue till all encroachments are removed,’’ said Garima Mittal, Commissioner, Municipal Corporation. She said the drive was in compliance with the Supreme Court order of June 7.

Though six weeks had been given, the duration of the drive has been extended in view of a large number of constructions still existing here. Though the MCF had identified around 6,500 illegal constructions, locals believe that the colony has far more houses than the official figure.

Meanwhile, a spokesperson of the Khori Awas Sangharsh Samiti, opposing the demolition, said the residents were not in favour of moving out of the colony till they were rehabilitated. He said temporary shelters in the form of tents and plastic sheds had been put to brave the weather conditions. The administration has announced a shelter on a temporary basis for the oustees on the premises of the Radha Swamy Satsang Bhawan located in the area for food and lodging.