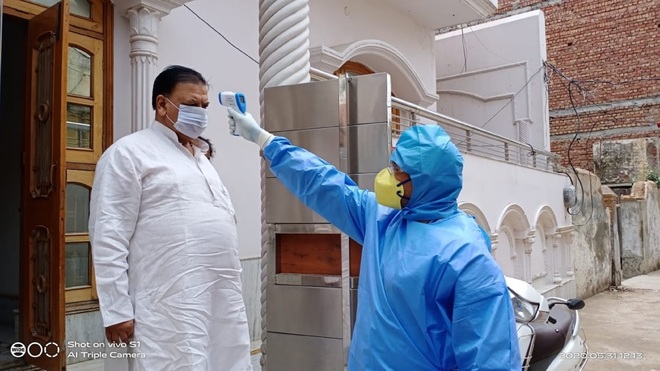 Covid cases continue to rise in Haryana, with 168 fresh cases taking the state’s tally to 2,091.The state also reported a suspected Covid death from Sonepat, with a 65-year-old woman having history of tuberculosis and respiratory disorders succumbing to the disease. However, the state health bulletin pegged the number of deaths at 20.

A total of 97 persons tested positive in Gurugram, followed by 28 in Faridabad and 20 in Bhiwani. Those infected include nine members of Bhiwani BJP MLA Ghanshyam Saraf’s family. Saraf’s personal assistant tested positive for Covid on Friday. The fresh cases also include nine from Hisar, four each from Ambala and Kurukshetra, two each from Mahendragarh and Karnal and one each from Palwal and Panipat.

Meanwhile, 77 persons were discharged today, taking the total number of those cured from the disease in the state to 1,048. There are 1,023 active cases in the state now.

Bhiwani turned into a hot spot, with nine members of Saraf’s family among 20 persons who tested positive since last evening. The MLA tested negative, district health officials said, adding that they had taken the second sample of the MLA and the report was awaited.

The Bhiwani Chief Medical Officer said a woman and her one-year-old child were among the 15 who tested positive on Saturday. Five persons tested positive on Sunday, which put the tally of active cases at 26. A health official said the Bagh Kothi locality, housing the residence of the MLA, was sealed and declared a containment zone.