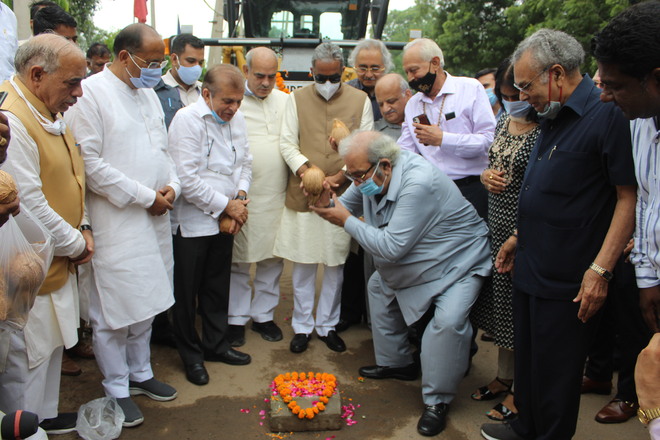 After a delay of about four years, the civic rejuvenation project of industrial sectors was inaugurated by local MP and Union Minister of State for Heavy Industries Krishan Pal Gurjar here on Saturday.

The project proposal prepared and submitted in 2017 was hanging fire due to some legal hurdles, claim sources in the HSVP, which will be carrying out the work. It aims at relaying all roads with concrete (RMC), laying water supply pipelines and augmentation of the sewerage network in the industrial areas of Sectors 24 and 25, NIT area and DLF industrial zone. The budget of the project has, however, been scaled down to Rs 107 crore from the previous estimate of Rs 190 crore after a review, it is revealed.

Project expected to be completed in yr

Though a proposal of Rs190 crore was submitted initially, it has been

re-budgeted after a financial review. Now, the project will cost Rs107 crore and is expected to be completed in a year. —Rajeev Sharma, Supdt engineer, HSVP

Claiming that all roads in these sectors were badly damaged and had potholes, a spokesperson of the Faridabad Industries Association (FIA) said the project was awaited for the past many years and one of the major issues of concern for the industry, which was providing employment to lakhs of residents.

“The repair of roads will help in the revival of the industry already facing problems related to the pandemic and lockdown,” says Ramnik Prabhakar from the Manufacturers’ Association, Faridabad. “Despite an annual revenue contribution of Rs 1,600 crore, the industry was a victim of poor infrastructure,” he added.

With a majority of bituminous (coal tar) roads in a dilapidated condition, entrepreneurs here have been raising the demand for repairs along with other civic amenities in industrial areas housing several thousand manufacturing units. Industrial units here are also facing issues of choked sewer lines and lack of potable water supply.

“Though a proposal of Rs 190 crore was submitted initially, it has been re-budgeted after a financial review,” says Rajeev Sharma, Superintending Engineer, HSVP.