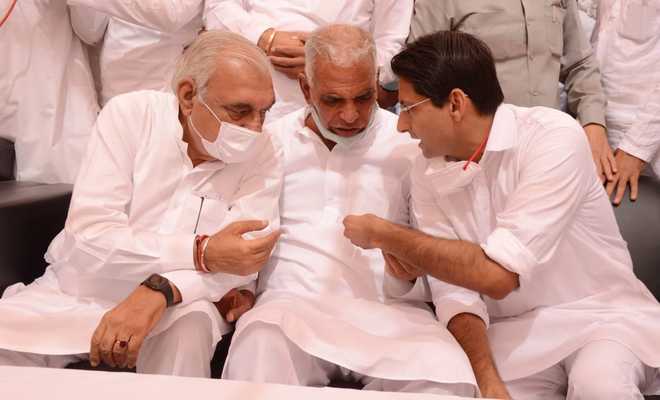 Former CM Bhupinder Singh Hooda, while addressing the gathering, welcomed the decision of Kapoor Narwal and said that Narwal’s decision has changed the scenario in Baroda constituency. Narwal’s joining has made the electoral battle a one-sided affair, he claimed.

Hooda assured the people present at the meeting that he would lead the fight for change and no one would be allowed to snatch the steering wheel handed over to him by the farmers and people of the state. Taking a dig at the BJP, former CM Hooda said that they have derailed Haryana, pushed the state into debt and made the state number one in unemployment and top in crime.

The time has come to oust the government which has pushed the youth towards drugs and crime, Hooda alleged.

Rajya Sabha MP Deepender Singh Hooda said the time for change has come. As the counting of votes in Baroda ends, the countdown of the BJP-JJP coalition government would start. The people of the state are now demanding change because this government has wasted six years of the state, he said.

“Baroda’s election is not just a contest between Congress versus BJP, Hooda versus Khattar or Induraj versus Yogeshwar Dutt. The election is to decide the future of Haryana. In this election, the people of Baroda have to decide whether they want to retain the BJP-JJP coalition government in Haryana or to overthrow it. This byelection has given Haryana a chance to uproot the government,” Deepender added.

On this occasion, Kapoor Narwal said he took the decision to withdraw from the race for the honour of Baroda and for change in Haryana.

He hoped that Bhupinder Singh Hooda would carry this fight to the end and would work to oust the BJP from power and the change would begin from Baroda, Narwal added.

Former Union Minister Jai Prakash and other MLAs of the Congress were also present during the occasion.