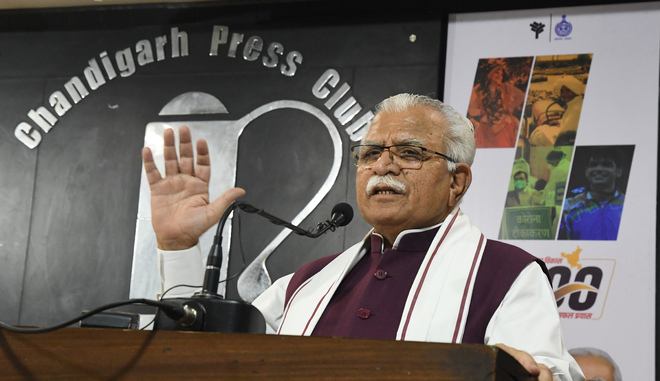 BJP, not Punjab, to blame for farmers' unrest: Capt on Khattar barb

Regarding Capt Amarinder Singh’s demand for his resignation, he quipped: “Who is Capt Amrinder Singh to ask for my resignation? Rather the Punjab Chief Minister should resign for instigating the farmers.”

“In Punjab, Capt Amarinder Singh is instigating the farmers against the three farm laws while in Haryana, (Bhupinder Singh) Hooda saheb and other Congress leaders are doing the same,” Khattar alleged.

Khattar asserted that around 85 per cent of the farmers sitting at Singhu and Tikri borders were from Punjab. Farmers in Haryana are mostly satisfied with the Haryana Government’s policies, he asserted.

Talking about lathicharge at Karnal, Khattar claimed that the farmers had already decided not to allow the BJP meeting to take place. The farmers should have protested peacefully. The district administration and the police did what was required to maintain law and order, he said.

He asserted that the farmers were not getting anything by these protests and the people were not sympathetic towards them. “I am getting calls from people that the farmers need to be dealt with sternly but we are exercising restraint as they are our people,” the Chief Minister said.

Answering another query, Khattar said a draft Bill on ‘love jihad’ was being prepared and it would either be brought as an ordinance or a Bill in the next Haryana Assembly session.