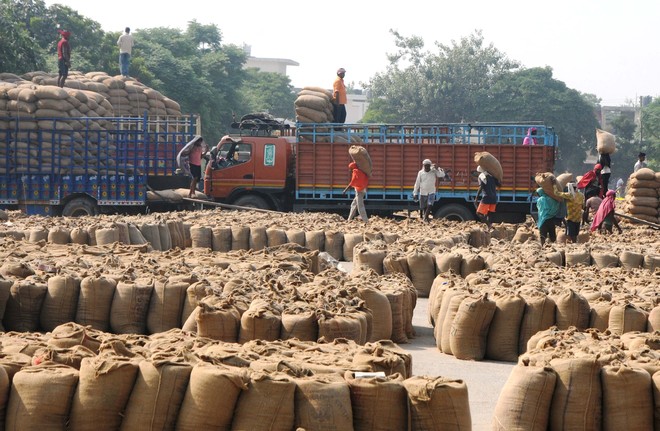 In a crackdown on the alleged nexus of the arthiyas and Haryana State Agricultural Marketing Board (HSAMB) employees procuring paddy from other places and issuing “fake” gate passes illegally, the administration got an FIR registered against four staffers of the Kunjpura market committee, who were on duty at the Gheer purchase centre.

Besides, 28 arthiyas of the Gheer grain market have been booked and their licences have been suspended. Apart from it, the stock of 18 arthiyas was found to be short in comparison to the record. The District Food Supplies Controller (DFSC) and the district manager (DM) of Hafed has issued show-cause notices to them. Discrepancies in the record of nine rice mills have also been found, for which action will be taken against them.

The action was taken by Karnal Deputy Commissioner Nishant Kumar Yadav on the report of HSAMB Zonal Administrator Gagandeep Singh, who visited the grain market following the direction of HSAMB CA Vinay Singh Yadav, who ordered the raid after the complaints of discrepancies at the centre regarding purchase from other places and issuance of “fake” gate passes.

On his report, an FIR was registered against the mandi supervisor Dheeraj Kumar, auction recorder Dharamvir Singh and computer operators Deepak and Anshul and 28 arthiyas of the Gheer grain market, the DC said.

“Illegal gate passes were issued jointly by Deepak, Anshul, Dheeraj and Dharamvir to 56 arthiyas. During physical verification, 28 arthiyas were found on the spot while the records of remaining 28 were not found,” he added.

The DC furher said: “I have directed the Indri SDM to check the grain market regularly. Kunjpura market committee and Gheer village secretaries have been directed to ensure their presence in the mandi round-the-clock to keep a vigil.”