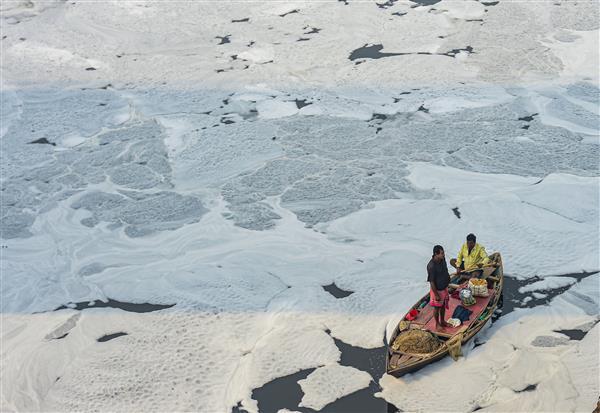 The Jal Shakti Minister said there was an occasional rise in ammonia level in the Yamuna at the Wazirabad barrage. PTI, file photo

After Delhi and Haryana Governments accused each other of frothing in the Yamuna, the Centre today said that the possible reasons for high ammoniacal nitrogen in the river included “discharge of untreated sewage from upstream towns in Haryana”.

A surveillance squad comprising officials of Haryana and Delhi has been formed to check present practices for treatment of sewage in the unauthorised colonies between Palla and Delhi. Gajendra Singh Shekhawat, Jal Shakti Minister

Minister of Jal Shakti Gajendra Singh Shekhawat replied to a question by MPs Manoj Tiwari and Ravindra Kushwaha on the issue in the Lok Sabha on Thursday.

The other reasons cited by the minister included discharge from industrial units especially fertiliser units, discharges from common effluent and sewage treatment plants, illegal discharge of sewage from un-sewered colonies in outer Delhi, septage discharge through tankers in Haryana and Delhi and less flow in the Yamuna coupled with anaerobic decomposition of accumulated sludge on the riverbed.

He told the House that the water quality assessment of Yamuna reveals that there is an occasional rise in ammonia levels in Yamuna at Wazirabad barrage. “The water treatment plants (WTPs) of Delhi Jal Board at Chandrawal, Wazirabad and Okhla lift partial raw water from Yamuna and stop water intake from Wazirabad barrage when ammoniacal nitrogen reaches the level of 1 mg/L as the WTPs operated by DJB do not have adequate preliminary treatment facilities to handle such raw water,” Shekhawat said.

He said, “This affects production of drinking water at these plants ranging from 50 million gallons per day (MGD) to 100 MGD.” He said the assessment of water quality of Yamuna was carried out by the Central Pollution Control Board (CPCB) at seven locations and major drains upstream of Wazirabad during January 7-13, twice a week during May 31 to July 12 at Palla, on Haryana-Delhi border, and during November 8-9 and November 11.

In respect of ammonia problem in Yamuna at Delhi, based on discussions in meeting on February 20, 2018, measures were made for action by the states. Shekhawat said, “Joint surveillance squad comprising officials of Haryana and Delhi has been formed for identification of hot spots and present practices followed for treatment of sewage in

the unauthorised colonies between Palla and Delhi.”