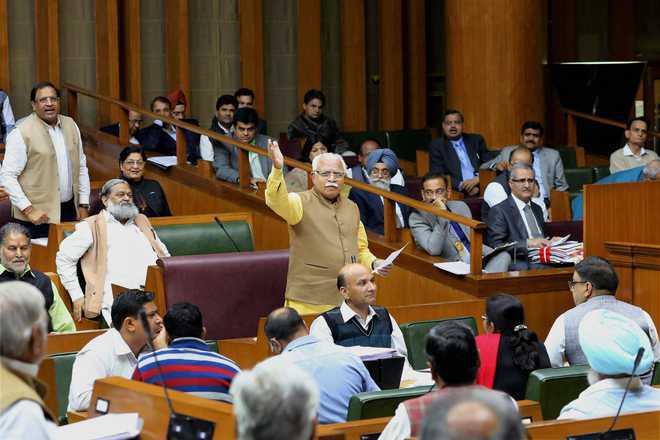 Noisy scenes were witnessed in the Assembly during a discussion on the Governor’s Address on Monday as Opposition members led by Gita Bhukkal of the Congress attacked the government on the farmers’ protest and BJP MLAs, including ministers Kanwar Pal Gujjar and JP Dalal, accused the Congress of misguiding farmers.

Protest not in state’s interest

The protest at the Delhi borders is not in the interests of the state. I get calls not to visit villages in my segment. We cannot even visit our constituencies, what to speak of working for people. — Devender Babli, JJP MLA

Carrying pictures of farmers who had died during the agitation, she said it was ironical that they were celebrating International Women’s Day even as hundreds of women had lost their husbands, sons and brothers because of the attitude of the government.

“A nation moves forward when its women become achievers. How will the country progress when its women are forced to protest on the roads?” she said. Terming the farm laws as “black laws”, she alleged the government was insensitive to farmers.

Bhukkal was interrupted by Gujjar, who said before terming the laws as “black”, the Congress MLA should clarify what was black about the three laws. Ruckus ensued when Gujjar accused the Congress of misleading farmers and held it responsible for the death of farmers.

Dalal retorted when Bhukkal referred to his comments on the deaths. She wanted him to apologise for his “insensitive” comments.

Some other members from the treasury benches came in support of the ministers. Kiran Choudhry, who was in the chair when Bhukkal started her speech, had a tough time managing BJP members.

The moment Trikha replaced Choudhry in the chair, she asked Bhukkal to take her seat as her time was over. This prompted Bhukkal to come to the Well of the House, demanding more time.

Leader of Opposition Bhupinder Singh Hooda intervened, saying time wasted by BJP members must not be counted. Trikha gave one more minute to Bhukkal to finish her speech.

Devender Babli of the JJP surprised everyone by targeting his government. He said happenings on the Delhi borders were not in the interests of the state.

“I get calls not to visit villages in my segment. We cannot even visit our constituencies, what to speak of working for them,” he said.

The television relay in the media gallery at Haryana Niwas went off when he was speaking. It was later clarified that it was a technical glitch.