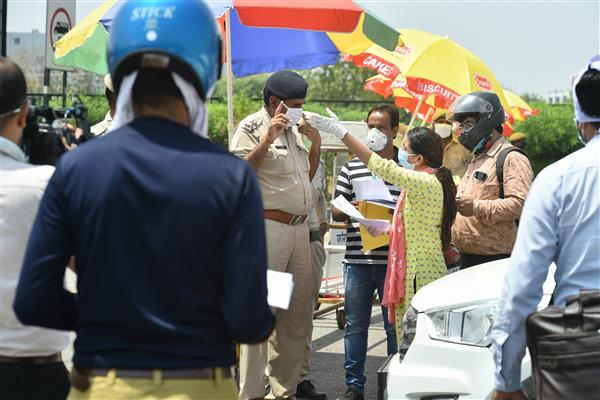 Commuters request police personnel to cross Delhi-Gurugram border after it was sealed by Haryana Government due to surge in COVID-19 cases. PTI photo.

The development takes the state’s infection tally to 647 if 14 foreign nationals are counted and 633 without that count.

Panipat registered its second fatality when a 28-year-old migrant labourer died in district general hospital in the early hours of Thursday. His test results came back positive, Panipat Civil Surgeon Dr SL Verma said. Originally from Bihar, the man had been living in Samalkha’s Jhattipur village for the last seven years.

He was admitted to the hospital on Wednesday with tuberculosis.

In Jind, three members of a family, including an elderly man tested positive days after their relative was diagnosed with the infection.

A 63-year-old fruit merchant and a 53-year-old vegetable vendor at Gannaur's mandi tested positive. District health department authorities said they had identified their contacts and quarantined them.

The district reported two more infections later in the evening.

A vegetable seller in Jhajjar’s Bahadurgarh and a 59-year-old woman from Rohtak also tested positive.

Meanwhile, Rewari, which has so far reported no coronavirus cases, said three people had tested positive in the district. But this has yet to be added to the final tally.

Haryana's daily doubling rate has now slipped to eight days, from 21 days on May 2.