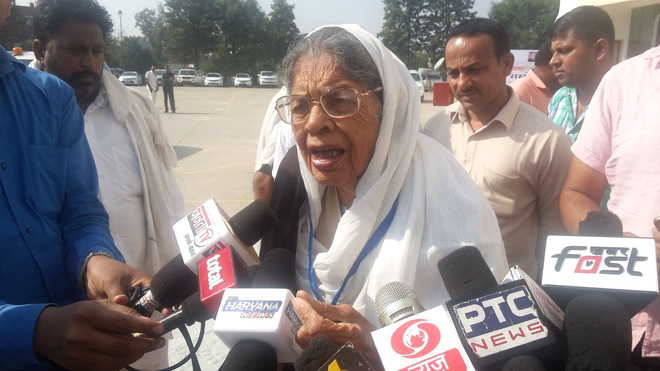 Veteran leader and former Lieutenant Governor of Puducherry Chandrawati had to be admitted to a private hospital here in the wee hours of Saturday after the 92-year-old suffered a hip fractured at her Charkhi Dadri residence and could not find a room at the Rohtak PGIMS.

“We took her to the PGIMS last night, but we were told that no VIP room was available as the ward in which VIP rooms are situated has been earmarked as isolation-cum-quarantine facility for the COVID patients and doctors. Hence, we shifted her to a private hospital in Rohtak,” said Jagjit, Chandrawati’s grandson.

Jagjit said they had to suffer inconvenience due to rush of patients at the PGIMS, but had no complaint against the hospital authorities as the shortage of rooms was due to the prevalence of COVID pandemic.

Chandrawati is the first woman member of the Haryana Vidhan Sabha. She is also the first woman Member of Parliament from the state. Apart from holding the position of Lieutenant Governor, she has twice served as Haryana minister.

Dr Sandeep, Deputy Medical Superintendent (Accidents and Emergencies) at the PGIMS, said the veteran leader was brought to the casualty wing last night, but her family members later took her to a private hospital as no VIP room was available at the institute owing to the creation of COVID-related quarantine facility at the special ward.

“Chandrawati was brought to our hospital around 1.30 am in the night with a fractured hip. As surgery was not advisable due to the age factor, we decided to put her on conservative treatment and installed a traction. She was discharged this afternoon,” said Dr Amit Batra, consultant orthopaedic surgeon at Holy Heart multispecialty hospital.