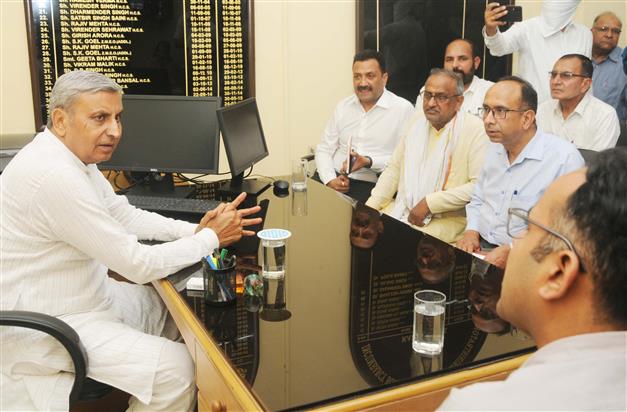 Agriculture Minister JP Dalal at a meeting in Karnal on Monday.

State Agriculture Minister JP Dalal today said that holding back of the produce by the farmers due to higher rates in the open market was among the factors behind the sluggish wheat arrivals in the grain markets this year.

The minister inspected the Pipli grain market in Kurukshetra and interacted with the farmers, commission agents and the officials today.

Dalal said, “A large number of farmers had shifted from wheat to mustard crop this year and due to higher prices in the open market, farmers are also holding on to their produce and haven’t reached the market. The fall in the yield will be clear in the crop-cutting experiment and the insured farmers will get compensation from the insurance companies for their losses. The farmers are getting good prices for their produce, including wheat, mustard, cotton and bajra, in the market.”

About the demand of bonus of Rs 500 per quintal being raised by farmer unions, the minister said it (bonus) was a matter related to the Central government.