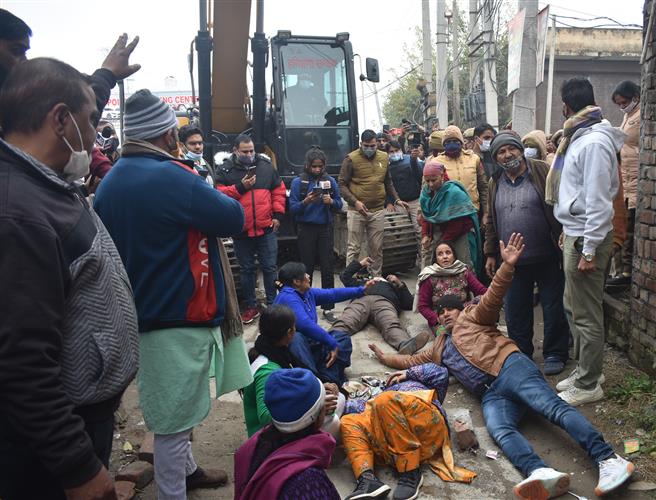 Protesters lie on the road in front of a JCB machine in Panipat.

Hundreds of people, including a large number of women, on Thursday opposed a demolition drive carried out by the Irrigation Department to remove illegal structures on the department’s land here.

The protesting women also laid on the road in front of the JCBs to oppose the drive as the officials tried to demolish a temple on Jatal road. The department said that the land is being vacated for the construction of a road that was announced by the CM.

A team of the Irrigation Department headed by XEN Suresh Saini in the supervision of Duty Magistrate-cum-ATP Navin Kumar, along with police force, reached Jatal road to demolish encroachments there. As the people saw the demolition team, they gathered at the gate of the Lord Shiva temple there. The protesters, including a number of women, stood at the gate of the temple and opposed the drive.

The police tried to forcibly remove the protesters and started demolishing a wall of the temple, but some protesters started pelting stones on the team. Some protesting women laid on the road in front of JCB machines. A woman climbed on the JCB’s cabin after which the drive was stopped by the officials.

SDM Dheeraj Chahal reached the spot and pacified the protesters.

Chahal said that the people want to meet the Deputy Commissioner. The demolition drive has been postponed for the time being.

Saini said that there was a drain from Assandh road to sugar mill but it was abandoned in the 80s. It was around 50-ft wide. People had encroached upon the land along the drain. The department today tried to carry out a demolition drive to vacate its own land, he said.

Some people had even gone to court and others had gone to the High Court, but the department had won all the cases, he added. A total of 103 structures, including two temples, were found constructed illegally on the department’s land, he said.

The XEN added that the Chief Minister had announced a plan to construct a 40-ft bypass which would connect Assandh road to Gohana road.

A final notice was served on the encroachers on December 29, 2021 to vacate the department’s land within a week. The notice period ended on January 6, the XEN said. The demolition drive has been postponed as the number of protesters was more than the police force, he said.