Karnal: Efforts on to repair breach in Western Yamuna Canal : The Tribune India

Karnal: Efforts on to repair breach in Western Yamuna Canal 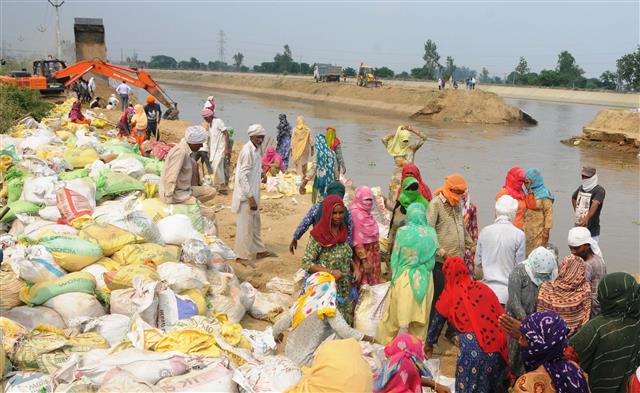 Efforts are under way to plug the breach on the second day in Western Yamuna Canal near Ghoghripur village, which turned wider to around 150-feet from 100-feet on Thursday evening.

A breach of around 100-feet was developed in one embankment of the canal along with a small one in another. However, no loss was reported in the nearby areas as the water was flowing into the supplementary canal.

The Irrigation Department pressed over 100 labourers and multiple machineries into service to plug the breach.

Subsequently, the authorities got the water level reduced from the head, but around 5000 cusecs of water is still flowing into the canal for Delhi and south Haryana.

“We have repaired the small breach which was reported in one side of the canal, while the repair work to fill the breach in the other embankment is being carried out. The work is likely to be completed in two days,” said Sanjay Rahar, SE, Irrigation Department.