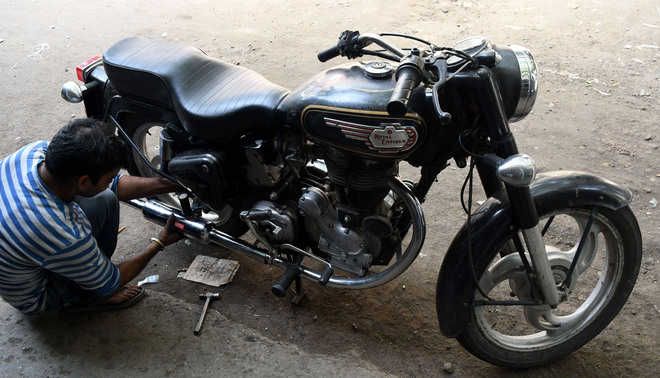 In a special drive to curb the growing use of modified silencers emitting firecracker-like sound in two-wheelers, the traffic police have fined 125 bike owners in the past one week. - File photo

In a special drive to curb the growing use of modified silencers emitting firecracker-like sound in two-wheelers, the traffic police have fined 125 bike owners in the past one week.

The cops have announced to further intensify the drive in order to rein in violators. “We will not allow any motorcycle or other vehicle that uses any loud sound or siren in an unauthorised manner on roads. This not only results in the violation of the traffic rules, but also creates nuisance and sound pollution,” says Rajiv Kumar, SHO, Traffic.

Claiming that the drive will continue indefinitely, he said this was perhaps the first time that such a huge number of violators had been penalised in the city in a short span. Revealing that the use of modified silencers to create cracker-like sound invites a penalty of Rs 2,000, he said a drive had been launched to put a curb on such an activity.

In the past one week, 44 motorcycles have been impounded and a penalty of over Rs 25 lakh has been imposed on the violators.