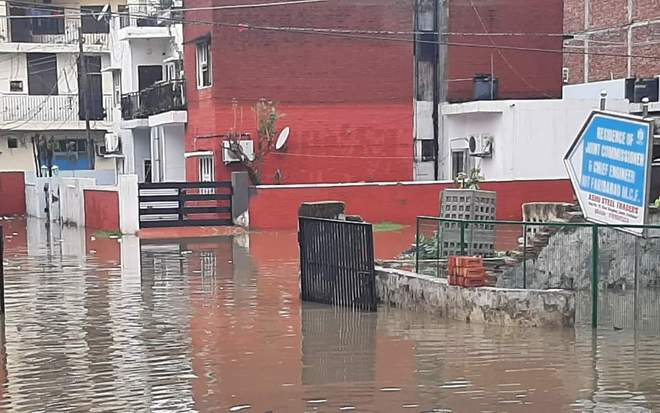 A flooded residential colony after recent downpour in Faridabad.

With a surge of around 114 per cent cases of dengue in the past four days here, the total number touched the figure of 77 on Tuesday.

This is 140 per cent more than the total cases reported in the entire year of 2020. The sharp rise is attributed to widespread water-logging and poor civic conditions prevailing in the city and the district after the recent heavy downpour witnessed in the past several weeks.

“Though a total of only 32 cases of dengue and nine of malaria had surfaced last year, rise in such cases was expected this year in the wake of the above-normal rainfall and the failure of the civic agencies to ensure the draining of the excess water, leading to the germination of malarial larvae, said sources in the Health Department.

“Acute waterlogging for several days and unhygienic civic conditions due to the poor disposal of garbage and waste have also been an open invitation for the growth of mosquitoes,’’ said an official of the department. A large number of the patients who have reported in the OPDs of both government and private clinics recently have either malaria or viral fever, it was revealed.

Admitting that almost all cases of dengue and malaria had surfaced in the past four to five weeks, Dr Ram Bhagat, district malaria officer, said the department had taken several measures to contain the menace. Besides engaging additional workers to prepare slides and tests of the samples, he said 40 teams had been deployed in the field to conduct the checking of the accumulation of water in and around the residential pockets. Around 1,625 notices have been served to the residents for the presence of mosquito larvae on their premises. Fogging

and spray of temiphos liquid has been increased in

the areas to contain the problem, he said. While the first case of dengue surfaced last month, no fatality has been reported so far.