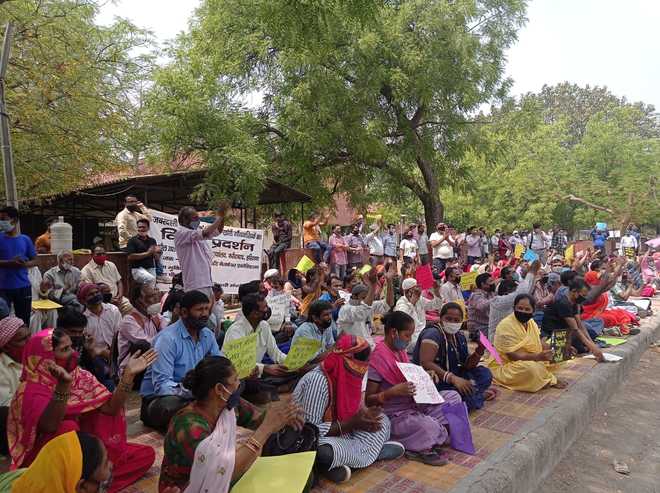 Residents and activists protest in Khori village on Tuesday.

Residents of the district’s Khori village staged a demonstration outside the mini-secretariat here today in protest against the anti-encroachment drive carried out by the Municipal Corporation.

They submitted a memorandum to the district authorities, demanding that they should not be evicted from the village. The protesters claimed more than 400 persons had been rendered homeless in the past six months because of the MC’s demolition drive.

“The MC razed another 300 houses of the poor without issuing any notice. The MC demolished our houses in spite of the fact that a case related to it is pending in the High Court,” he said.

Gowada Prasad, a resident of Khori village, said no prior notice was given to residents, who had been living in the village for the past several years. The memorandum submitted to the DC office sought a three months’ notice before eviction, revision of the rehabilitation deadline from 2003 to 2015, provision of food and lodging facilities to those who had been evicted and regularisation of houses located in labourers’ colonies.