Built at a cost of 23L with vision to promote cycling 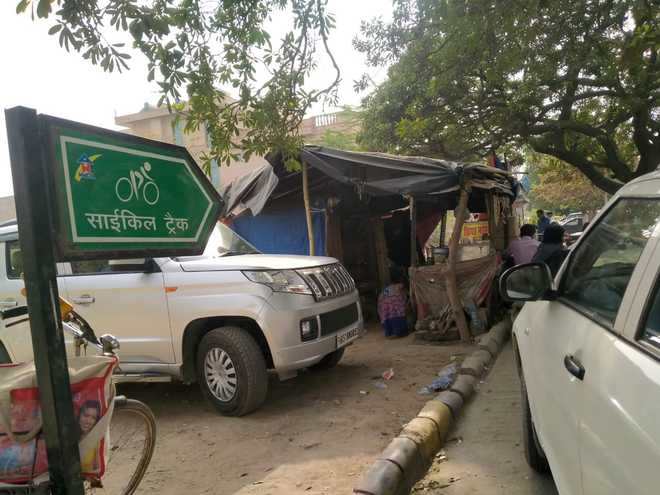 The vision of promoting the usage of cycles in the city remains only on paper. The 1.5 kilometres cycle track, the only one of its kind built at a cost of 23 lakh four years ago, has been non-functional and reduced to almost rubble. However, now, the track has been encroached upon.

The track has been occupied by vendors, hawkers and parking mafia as it is located near the Mini-Secretariat.

Located very close to the Mini-secretariat, the district headquarters here, the track has been left with only a couple of signboards which claim that the passage along the road dividing Sectors 12 and Sectors 10-11 has been a track, which had been missing since the day one. Claiming that this had been the only cycle track that had been constructed by the HSVP(HUDA) and was expected to give a new definition to the promotion of non- motorised transport, but could not get on track due to issues like the quality and lack of promotion,’’ says an official in the local administration. Moreover, the area where it was built was a commercial or institutional sector, he said a majority of the people who came here used motorised vehicles. “They only need an authorised parking lot, resulting in chaos as hundreds of two-wheelers or four-wheelers are parked at any available space near the secretariat.

Claiming that a cycle track is most suited in residential areas, Anoop Chaudhary, a resident, said the authorities had failed to conduct the feasibility study properly and that was the reason why the project had failed. “The track has been occupied by vendors, hawkers and parking mafia as it is located near the Mini-Secretariat,” says Pratyush Sharma, an advocate, here. While it was built on the dividing road of Sector 11 and 12 connecting the Mini-Secretariat with the Mathura road, a similar project proposed on the dividing road of Sectors 12-15 was abandoned due to non-feasibility, it is revealed.