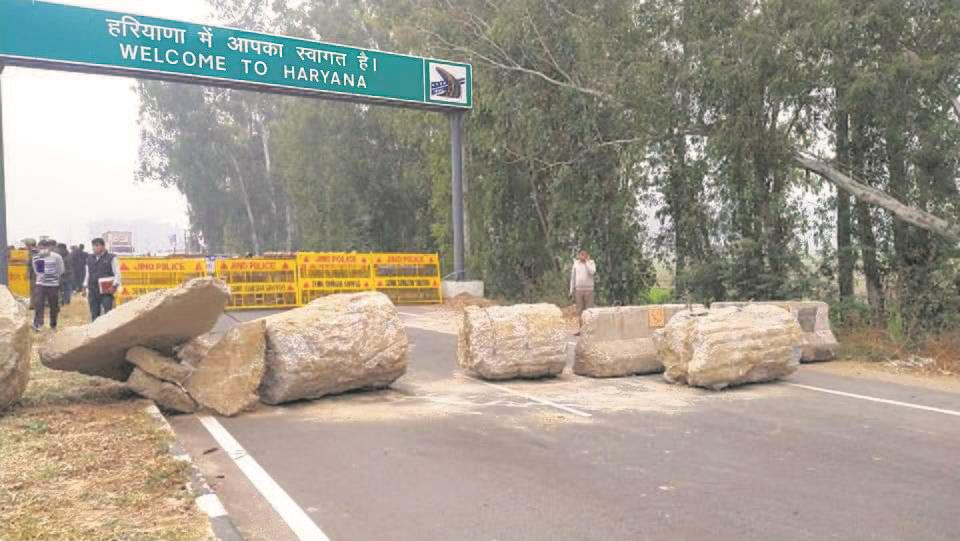 Carrying food, warm clothes and other essential items, farmers on about 100 tractors reached near Data Singhwala village of Jind district located along the Punjab border on Wednesday.

The Jind administration has blocked their entry in Jind by putting huge stones on the road. The farmers have put up their camp along the road about half a km from Haryana border.

The protesting farmers hailing from various districts of Punjab are accompanied by women. They are carrying food, including flour and ghee, kitchen utensils and warm clothes, on their tractor trailers. About 100 tractors started reaching the Jind border on Wednesday morning which is continuing till the filing of this report.

The farmers maintained that around 10,000 farmers on about 2,000 to 2,500 tractors would reach this spot by Thursday morning and they would proceed from Data Singhwala to Delhi on Thursday morning.

“We have enough food and other essential items for staying in camps for one month. We will procure more goods as and when required,” said one of the farmers.

“Nobody can stop us from moving further. We have taken a halt for our brethren coming from far,” he said, adding that they are fully equipped and required no help mid-journey.

Ramraji Dhull, a Bharatiya Kisan Union from Jind who reached Data Singhwala village, said that the Punjab farmers were “unstoppable” even as the police have been deployed near the border in large strength. He said that the police have sealed all the roads leading towards Delhi and other districts of Haryana from Jind.

Meanwhile, Haryana farmers from Hisar, Jind, Sirsa, Fatehabad and Bhiwani districts are also planning to march to Delhi on Thursday.

Sources said that that farmers from different villages have decided to get divided into small groups that will start their march towards Delhi by vehicles and on foot.

The Hisar administration has imposed Section 144 in the district.