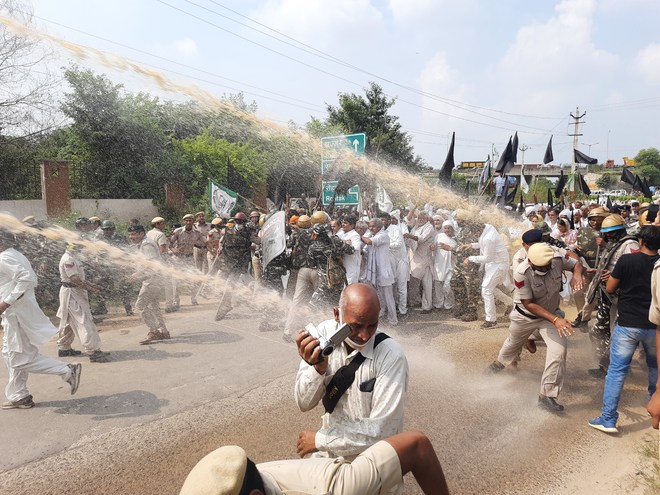 Police use water cannons on farmers in Jhajjar. Tribune Photo

Carrying black flags, farmers opposed the visit of Deputy Chief Minister Dushyant Chautala today, in Jhajjar city. They shouted slogans and staged a dharna near the programme venue at Pt JLN Government College in the city.

The police used water cannon on the protesters to stop them from heading towards the venue, when they tried to remove the barricades, ahead of the arrival of the Deputy Chief Minister.

Deputy Commissioner Shyam Lal Punia and Superintendent of Police Rajesh Duggal rushed to the spot and pacified the farmers. Later, a group of protesters reached near the venue and showed black flags to the vehicles in the cavalcade of the Deputy Chief Minister, from a distance.

The Deputy Chief Minister was here to distribute biometric equipment and certificates among women of self-help groups registered under the Haryana Livelihood Mission Common Service Centre. The protesters continued the dharna until Dushyant left the venue after the programme.

Meanwhile, the All India Kisan Sabha (AIKS) criticised the use of water cannon on the farmers, claiming they were protesting peacefully, but force was used to disperse them.

AIKS leaders Phool Singh and Sumit Singh said the farmers were fighting a decisive battle against the three black laws that had been enacted to ruin them. “The AIKS activists will prominently participate in the protest against the BJP-JJP legislators and MPs from tomorrow, following the call given by the Samyukt Kisan Morcha against the delay in procurement of bajra,” said Inderjit Singh, vice president, AIKS.