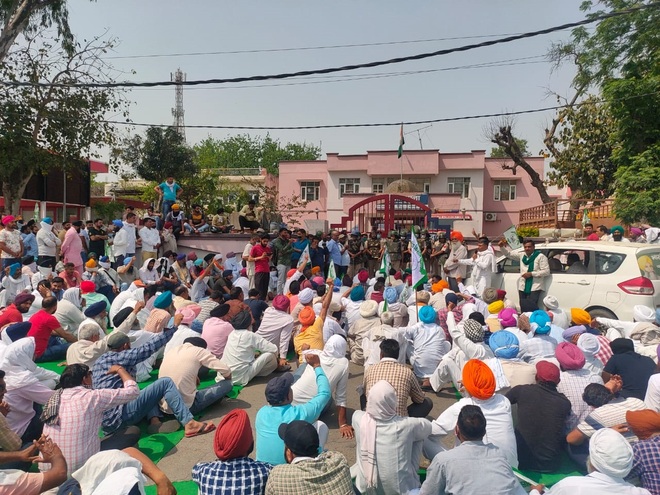 Farmers protest outside the police station in Shahabad on Wednesday.

Hundreds of farmers today staged a dharna outside the Shahabad police station in Kurukshetra in protest against the arrest of four of their brethren in connection with the attack on Kurukshetra MP Nayab Singh Saini’s SUV. They condemned the police for adding attempt to murder charge to the FIR.

The Kurukshetra police last night registered a case under Sections 148, 149, 323, 307, 341 and 427 of the IPC against 21 persons, including 10 unidentified protesters. Four farmers — Hakam Rai, Kulwinder Singh, Kehar Singh and Gurmeet Singh — were arrested. They were produced before a court, which sent them to judicial custody.

As the news of their arrest spread, farmers gathered at Shaheed Udham Singh Trust around 9 am, took out a protest march and sat on dharna outside the police station.

They raised slogans against BJP MP Saini and demanded the release of the four farmers.

Around 4.30 pm, a five-member committee held a meeting with Shahabad DSP Atma Ram. After the meeting, the farmers lifted the dharna on the assurance that the police would recheck the facts of the case.

BKU (Charuni) spokesman Rakesh Bains said, “Farmers neither pelted the SUV with stones nor caused injury to the MP. The police have been unable to justify Section 307 in the FIR. The police have sought three days for the investigation. If we are not satisfied the police probe, a panchayat will be held on April 12 to decide the further course of action.”

The DSP said, “The police will recheck the facts.”