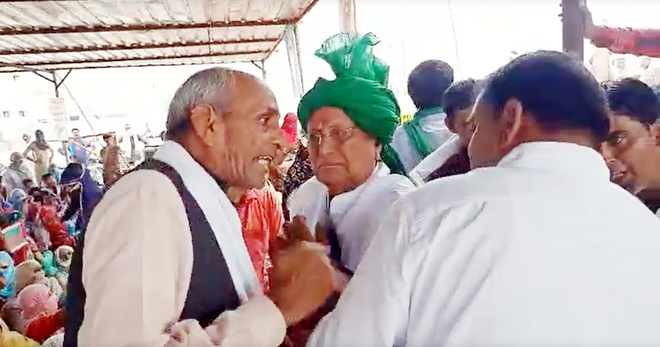 In keeping with the norm of not allowing political leaders from addressing protesting farmers at dharna sites, the Khatkar toll plaza committee today refused permission to former Chief Minister Om Prakash Chautala from addressing the protesters from the dais.

The Indian National Lok Dal (INLD) supremo reached the toll plaza, situated on the Jind-Chandigarh highway, to extend support to farmers, who have demanding withdrawal of the three agricultural laws.

He stayed at the dharna site for nearly half an hour, and was offered milk and tea. When he expressed his desire to address the gathering from the dais, toll plaza committee head Satbir Pahalwan refused.

Pahalwan told the media the committee adhered to the norm of denying political leaders the permission to share the stage. “We accorded due honour to the former Chief Minister, but it was our collective decision to not let any political person speak from the dais,” he said.

Later, Chautala reached the Baddowal toll plaza near Narwana and addressed the gathering of farmers. He claimed the BJP government in the state was on its way out and the peoples’ government would attain power.

He added the agitation being led by all castes and communities had given a befitting reply to the ruling party, which, he said, was trying to divide people on caste lines.