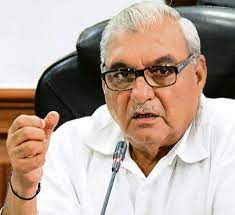 Former Chief Minister and Leader of the Opposition Bhupinder Singh Hooda today alleged that the farmers of the state were suffering due to the policies and decisions of the government. He said the government continued to raise fertiliser prices even as the state is under lockdown.

“There is open looting in the purchase of DAP, which was earlier being sold at Rs 1,200 per bag. The government had promised to roll back the increased prices, but farmers were forced to buy it at Rs 1,600 per bag in April and Rs 1,900 per bag in May. The government should clarify the situation regarding the DAP price and roll back the increased prices,” he said.

Hooda said the government had suddenly stopped procuring wheat and it had caused distress to the farmers. “The government is yet to pay the farmers for the purchases made so far and a payment of Rs 7,000 crore remains outstanding. The government should clear the dues,” he said.