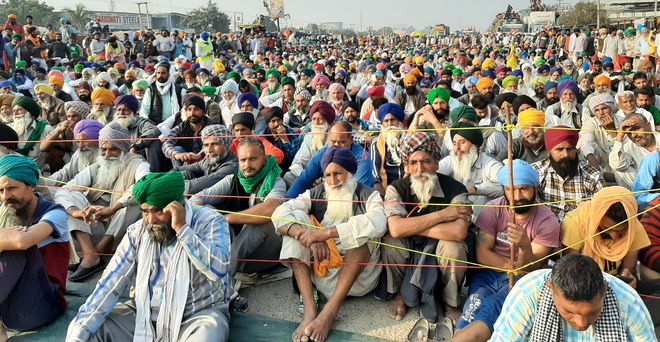 Hundreds of farmers stage a dharna at the Singhu border on Monday. Tribune photo

Thousands of farmers from Punjab were on Monday adamant on staying at the Tikri-Bahadurgarh border until the three recent farm laws were withdrawn. Local residents started coming out to help them by providing fruit, vegetables and other eatables.

“We are getting good support from people of nearby villages. They provided us vegetables, fruit, roti and water and gave an assurance on making arrangements for milk. They have given their mobile phone numbers in case any sort of help is required. The district administration has arranged mobile toilets and medicines,” said Amit Nain, a protesting farmer.

Harvinder Singh, another farmer, said residents of Titoli village in Rohtak came with milk, lassi, bananas and flour this morning while a langar was organised by local residents near Sampla on the Rohtak-Jhajjar highway to serve food to farmers en route.

The All India Khet Mazdoor Sangthan led by Jai Karan Mandothi and Rajendra Nimoth took out a protest march against the three farm laws.

The protesting farmers celebrated Gurpurb on the Tikri-Bahadurgarh border. “We prayed to Guru Nanak Dev to give wisdom to the Centre so that it gives relief to farmers by withdrawing the three farm laws,” said Balwinder Singh, a farmer leader.

Jaswinder Singh, another farmer leader, said the Centre had forced them to celebrate Gurpurb at the Delhi border while they used to go to gurdwaras in Punjab during this festival.

Sonepat: Farmers continued their dharna at the Singhu border on the NH-44 for the fourth consecutive day on Monday.

During a press conference at the dharna spot, Balbir Singh Rajewal, Gurnam Singh Charuni, Darshan Pal Singh, Yogender Yadav and Shiv Kumar Sharma, representatives of the All India Kisan Sangharsh Coordination Committee, said the intention of the Union Government was not clear.

The farm leaders said they had come for a decisive battle against the three farm laws, an ordinance imposing Rs 1 crore fine and three-year imprisonment for burning stubble and the recommended electricity Bill. “We are ready to talk to the government, but it should be unconditional. We have rejected the proposal to shift to the Burari ground and will continue our agitation till our demands are met,” said Darshan Pal.

The farmer leaders said a meeting would be held to strengthen the farmers’ agitation and the next strategy would be decided at the meeting. Terming the farmers’ protest as historic, Yadav said farmers had gathered after 31 years.

Chandigarh: The Sarv Karamchari Sangh, the apex body of government employees in Haryana, has extended its support to the ongoing farmers’ stir on the Delhi border. Sangh chief Subhash Lamba said the decision was taken at a virtual meeting of the executive committee on Monday. The sangh will also hold statewide protests on December 3 to show solidarity with farmers. TNS

Chandigarh: Prominent sportspersons from Haryana have extended their support to the protesting farmers. Bajrang Punia has appealed to people to become the voice of the agitating farmers. Boxer Vijender Singh also took to twitter to extend his support to the farmers. Wrestler Babita Phogat, who was recently appointed chairperson of the Haryana Women Development Corporation has, however, urged the farmers to hold discussions with the government for the resolution of their issues. Wrestler-turned-politician Yogeshwar Dutt too asked the farmers to cooperate with the government. TNS

Chandigarh: At least 130 khap panchayats of Haryana on Monday announced that they would join the ongoing farmers’ stir on Delhi border from Tuesday. “All khap men are first farmers and then leaders,” said khap spokesperson Jagbir Malik. He said all khaps of Haryana had unanimously decided to support protesting farmers. IANS

Take up farmers’ issue with Centre: Cong to CM