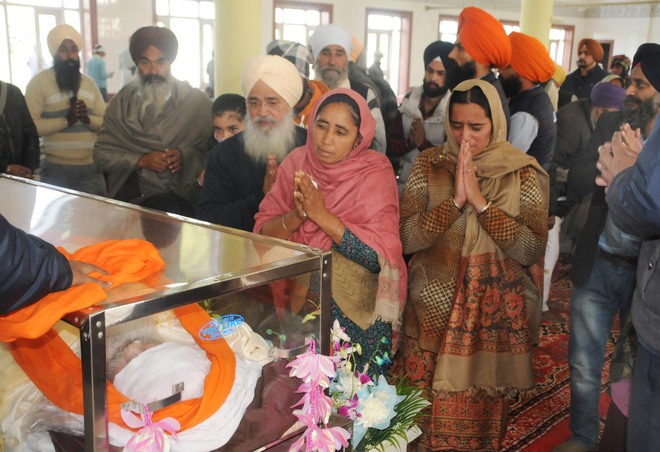 The mortal remains of Baba Ram Singh, who reportedly committed suicide on Wednesday, were kept at Nanaksar gurdwara in Singhra village. The last rites will be performed on the gurdwara premises on Friday.

No weapon recovered from vehicle

Baba Satnam Singh, a close aide of the preacher, said no weapon was recovered from the vehicle in which Baba Ram Singh reportedly committed suicide. Asked about the postmortem report, Karnal SP Ganga Ram Punia said it would be handed over to the investigation officer

Thousands from Haryana, Punjab and other states, including political leaders, paid their last respects to Baba Ram Singh and recalled his contribution to society.

“He always showed the right path to people and his sacrifice would not go in vain,” said Navdeep Kaur. Naresh Kumar, another follower, said Baba Ram Singh was a great preacher and used to travel within and outside the country to preach.

“It is shameful that farmers are dying while the BJP government, instead of finding a solution, is constantly resorting to petty tricks to suppress the voice of farmers. He has attained martyrdom in support of farmers and his martyrdom will never be forgotten,” Selja said.