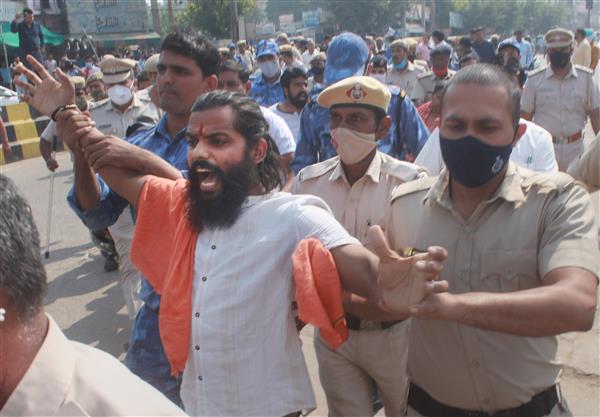 Police detain residents and members of various pro-Hindu organisations after they staged a protest namaz in an open site at Sector 12, in Gurugram on October 29, 2021. PTI file photo

The Gurugram administration said on Tuesday that it was rolling back on its decision to allow namaz in eight places in the city—a development that comes on the back of protests from fringe Hindu groups.

The administration has promised similar action in some other places where Hindu groups and locals have raised objections, an official said.

Apart from this, a committee has also been constituted by the Deputy Commissioner Gurugram to identify the places to offer mamaz, in which Sub Divisional Magistrate (SDM), Assistant Commissioner of Police (ACP), members of Hindu/Muslim organization and other social organizations have been included, IANS said in its report.

After talking to all the parties, this committee will decide which places will be used to offer Namaz in the future, IANS quoted an official as saying. The committee will also ensure that Namaz is not offered on any road or public place, Subhash Boken, spokesperson of the Gurugram police, said. Also, local people do not have any objection to identifying a place for namaz.

"Namaz can be offered only at Idgah, Masjid or designated places. Due to the decision taken by the committee in this matter, the brotherhood and social harmony of both the organizations should be maintained for which the district administration is committed. For this the cooperation of both the organizations is also required," IANS quoted Subhash Boken, spokesperson of the Gurugram police, as saying.

Both organisations are bound to maintain law and order. Consent from the administration is necessary for namaz in any public and open place, the spokesperson said.

"Special security arrangements have been made by the Gurugram Police in this regard and the police are keeping a vigil," Boken said, according to the IANS report.

The development has come amid fears of shrinking public places for minorities, particularly Muslims, across the country. Fringe Hindu organisations have been spearheading protests against the public offering of namaz in several designated places in Gurugram, particularly Sectors 12 and 47. The protests occur despite explicit sanction for Muslims to hold prayers at these sites—permission that was given the last time such protests disrupted namaz.

Public prayers and the subsequent protests have increasingly threatened to spill over during almost every Jumʿah—or Friday—prayers, forcing the administration to send out reinforcements to avoid violence.

Thirty people were detained and booked last Friday for trying to disrupt namaz.

The eight places were among 37 designated sites approved by the administration for namaz.

--- With inputs from IANS