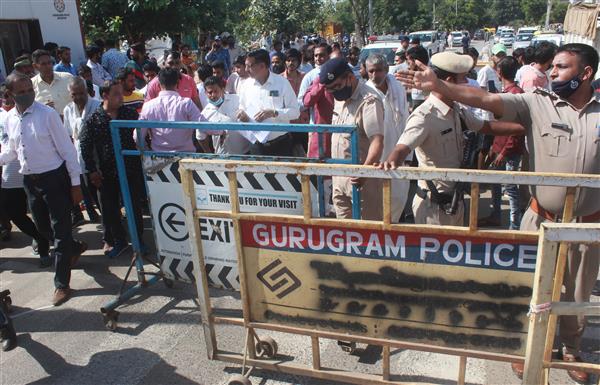 Residents and members of various pro-Hindu organisations stage a protest against conducting Namaz (Friday prayers) in an open site at Sector 12 in Gurugram on Friday. PTI photo

Such protests against the public offering of namaz have now become a weekly event, with protesters, chief among them fringe Hindu outfits, chanting Jai Shree Ram. Protesters in Sector 47, which saw protests after a two-week gap, have been claiming the designated prayer is private land that cannot be “encroached upon”.

On Friday, protesters continued to chant Hindu slogans and protest public prayers even while police tried to intervene. Protesters claim that the prayers could cause “law and order problems”, an allegation that several, including former Nuh MLA Zakir Hussain, deny.

“This is just a political and publicity stunt,” Hussain, the administrator of Haryana Waqf Board and a leader of Chief Minister Manohar Lal Khattar’s Bharatiya Janata Party, said. “Namaz is being offered only at places allocated and there is no traffic or law and order situation. Some disgruntled elements are trying to attack communal harmony and the secular spirit of the Khattar government. This is a violation of one’s right to practise one’s religion.”

Local MLA Sudhir Singla said he would hold a meeting with the police commissioner over the dispute.

“The chief minister has clarified that namaz could be offered at allocated places to ensure there is no disturbance or law and order problem,” he said. “I will meet the police commissioner and try to work out a solution.”