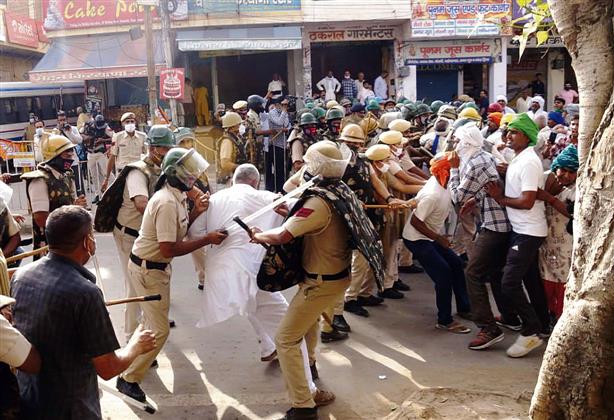 Policemen try to restrain protesting farmers in Hisar on Sunday.

Continuing their protest against the ruling BJP-JJP leaders of the state against the Centre’s three farm laws, farmers broke barricades to show black flags and raise slogans against the BJP leaders, including Agriculture Minister JP Dalal, Deputy Speaker Ranbir Gangwa and Sonali Phogat, who arrived for the Ambedkar Jayanti function here today.

The police used mild force to restrain the protesters and keep them at some distance from the venue. The BJP leaders attended the event amid tight security. Seven protesters, including three women, were detained. They were released after the event.

The drama unfolded when a group of farmers arrived at the venue on getting information about the arrival of the BJP leaders. The police raised barricades at various points to block the entry of protesters at the venue.

As soon as the BJP leaders reached the venue, the farmers in small groups dodged the police and some of them manged to slip inside the venue. They showed black flags to the BJP leaders and raised anti-BJP slogans.

Earlier, the police, led by SP Balwan Singh Rana, had a tough time restraining the protesters. The drama continued for nearly three hours till 5 pm. Shamsher Nambardar, a leader of the Kisan Sabha, said farmers managed to show black flags to the BJP leaders. He said even locals were unhappy over the function organised by the BJP today.