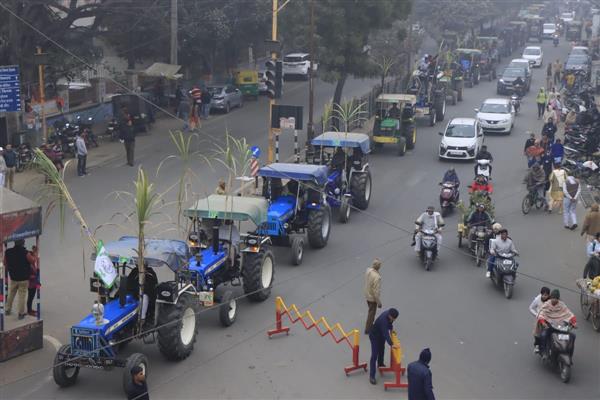 Farmers take out a tractor rally in Rohtak on Wednesday. Tribune photo

The Haryana Government on Wednesday increased the state-advised price (SAP) for sugarcane to Rs 372 per quintal with a hike of Rs 10 per quintal. However, unimpressed with the hike, the BKU (Charuni) has termed the cane-price hike as a cruel joke on farmers.

The government increased the SAP after a committee formed to decide the price for sugarcane submitted its report to the Chief Minister. State Agriculture Minister JP Dalal and ACS Sumit Misra were present on the occasion.

Farmers have been protesting for a hike in sugarcane price to Rs 450 per quintal. They stopped sugarcane supply to sugar mills from January 20, bringing the operation mills to a halt.

He said, “The sugarcane price for the season will be

Rs 372 per quintal and will be increased again next year.” He appealed to farmers to resume supplies of sugarcane to mills so that their operation could resume from Thursday. Khattar said, “Closure of sugar mills is neither in the interest of farmers nor of the mills.”

The CM said, “Safeguarding the interest of farmers is the utmost priority of the government. Sugar mills are constantly facing financial losses. At present, sugar mills of the state are facing a loss of Rs 5,293 crore. Average cost of sugar production is much higher than the selling price. The Opposition parties and unions shouldn’t politicise the issue.”

Meanwhile, different groups of farmers led by BJP leaders met Chief Minister and thanked him for increasing the sugarcane price.

JJP Shahabad MLA and Sugarfed chairman Ram Karan Kala, who met Chief Minister today, said, “Farmers are not happy with the increase of Rs 10 per quintal. I have requested the CM that the price should be increased by Rs 20 per quintal.”

On the other hand, BKU (Charuni) chief Gurnam Singh said, “The hike of Rs 10 per quintal is not acceptable. It is a cruel joke on farmers. We condemn the Haryana Government for the inadequate hike in sugarcane price. The farm activists will continue to protest as per the schedule given to them. A meeting will be held to decide the future course of action on Thursday in Kurukshetra.”

Union spokesman Rakesh Bains said, “Those who thanked the CM are ‘sarkari’ farmers. We are firm on our demand for Rs 450 per quintal of sugarcane for the ongoing season.”

Meanwhile, sugarcane farmers held protest marches against the government. They burnt effigies of the Chief Minister to mark their protest.