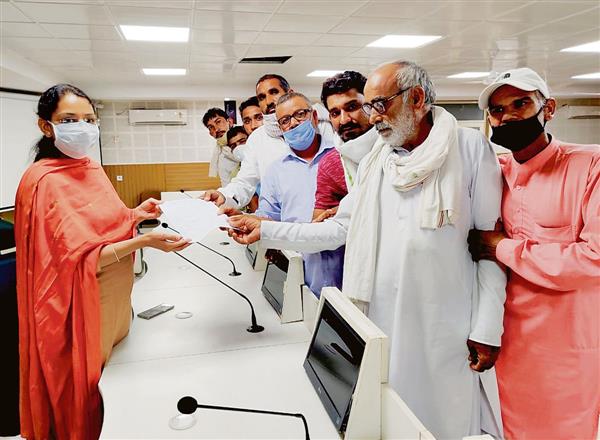 DC Priyanka Soni hands over the order of special girdawari to farmers in Hisar on Monday.

The state government on Monday acceded to the demand of the protesting farmers for special girdawari (survey) to assess the crop loss.

However, the farmers continued with the dharna as they are still not satisfied with the special girdawari order to asses only the crop loss due to floods/standing water and heavy rain. They said even whitefly and other diseases had caused massive damage to the kharif crops across the state hence, special girdawari should be ordered to asses this loss too.

Farmers’ leader Kurdaram Nambardar said a delegation met Deputy Commissioner Priyanka Soni, who informed them about the special girdawari order. “However, we were told that another order for special girdawari to assess the crop loss due to whitefly and other diseases will also follow. Thus, we have decided to continue the dharna until the survey to assess the comprehensive loss to the kharif crops is issued,” he added.

Earlier, farmers of nearly 20 villages organised a mahapanchayat in Balsamand village, demanding special girdawari of the damaged cotton and moong crops in the region. As many as 2,000 farmers sought a written assurance from the DC and threatened to intensify their stir from Tuesday, if the authorities continued to ignore their demands.

Upset over a report showing only 10 per cent crop loss due to whitefly in 20 villages, farmers demanded an apology from the official concerned.

Meanwhile, DC Priyanka Soni said the government had decided to carry out the special girdawari of the crop loss. A nambardar and farmers would accompany the survey team in their fields, the DC added.