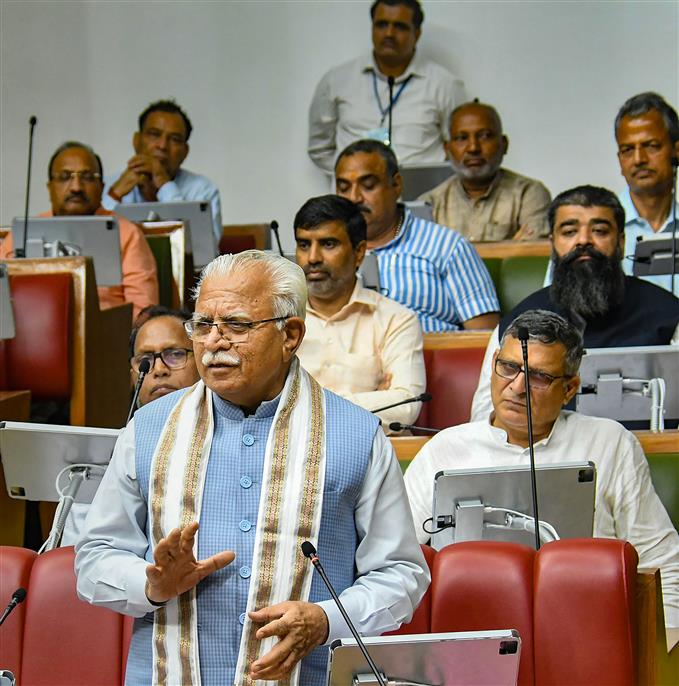 The Haryana Vidhan Sabha witnessed walkouts by the Congress twice and constant disruptions during a discussion on the issue of threat calls to six MLAs and over the murder of DSP Surender Bishnoi in Nuh.

As Speaker Gian Chand Gupta had listed the issue as a calling attention motion, the Congress, led by former CM Bhupinder Singh Hooda, protested and demanded that it should have been taken as an adjournment motion and staged a walkout.

They walked out again when Home Minister Anil Vij told the House that the rise in crime during the Congress regime was more than that during the BJP rule.

He said the Special Task Force’s technical analysis of phone calls revealed that the numbers used to make the threat calls were registered in countries in West Asia and operated from Pakistan. A team had been deputed to coordinate with the central agencies regarding the investigation abroad, he said.

The Home Minister said six members of a gang (two from Mumbai and four from Muzaffarpur, Bihar) had been arrested and a total of 55 ATM cards, 24 mobile phones and 56 SIM cards recovered from their possession.

It was learnt that the persons involved were cyber fraudsters, not associated with any terrorist organisation or extortion racket, he said. Vij said it had also come to light that three MLAs from Punjab and two AAP MLAs in Delhi had also received threatening calls. “The investigation has revealed that an amount of Rs 2.77 crore was withdrawn from 55 bank accounts. We are further investigating the case. We have busted an international gang,” he added.

Independent MLA Balraj Kundu said the matter was serious and there was an atmosphere of fear.

On DSP Surender Bishnoi’s murder, Home Minister Anil Vij said 12 men had been arrested in the case. A total of 1,835 cases of illegal mining were registered in Haryana during from January 1, 2020, to July 31, 2022. As many as 1,977 persons were arrested.

21 hours ago
4
Punjab The Tribune Impact