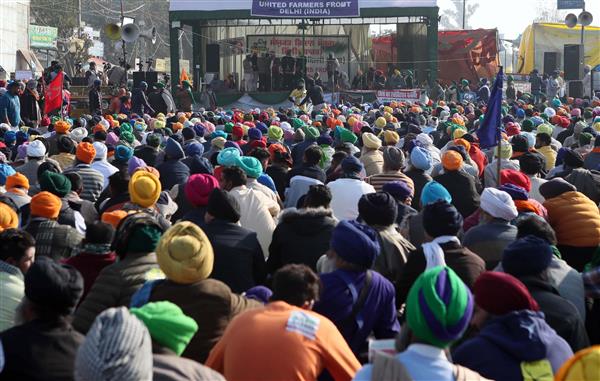 Farmers during their ongoing protest against the Centre's new farm laws, at Singhu border in New Delhi. Tribune file

Ahead of Monday’s hearing on a PIL seeking removal of blockades at key roads connecting Delhi to NCR regions by farmers demanding repeal of farm laws, the Haryana government has moved the Supreme Court to make 43 officer-bearers of farmers’ organisations parties to it.

In an application filed in the top court, the Haryana government has sought to implead farmer leaders Rakesh Tikait, Yogendra Yadav, Darshan Pal, Gurnam Singh and others to the ongoing proceedings.

Maintaining that the Dharna on Singhu and Tikri borders was being organised by Samyukt Kisan Morcha—a body of number of Kisan unions – Haryana government said the names of parties mentioned in its plea were those of the office bearer/workers of various Kisan unions.

The top court is hearing a petition filed by Monicca Agarwal—a women resident of NOIDA – on the issue. Agarwal—a single parent with some medical issues—alleged that due to blockades enforced by agitating farmers travelling between NOIDA and Delhi was taking two hours instead of the usual 20 minutes and that it had become a nightmare to commute between Noida and Delhi.

Earlier, in an affidavit filed in the top court, he Haryana Government had said it’s making “sincere” efforts to remove the blockade for resumption of free flow of traffic. The UP government had also filed a similar affidavit stating that it’s making all efforts to convince farmers that their act of blocking roads was causing grave inconvenience to commuters.

Giving details of its efforts, the Haryana Government said a state-level committee headed by the Additional Chief Secretary was formed to find a way out. The panel’s September 19 meeting wasn’t attended by the farmers’ leaders.

As farmers continued to block key roads connecting Delhi to NCR regions, the Supreme Court had on September 30 wondered how highways can be blocked perpetually and made it clear that it’s the duty of the executive to implement the law laid down by it.

“The redressal of problems can be through judicial forum, agitation or through parliamentary debates. But how can the highways be blocked and this is happening perpetually. Where does this end?” a Bench led by Justice SK Kaul had asked.

“We may lay down a law but how to implement the law is your (the government’s) business. The court can’t implement it. It is the Executive which has to implement it,” it had noted.

On October 1, another Bench of the top court had questioned the rationale behind blocking roads even after approaching the judiciary and reminded the agitating farmers that citizens had equal rights to move freely without fear.

“You have strangulated the entire city, now you want to come inside the city and start protesting again here… The residents around... are they happy with the protest? This business should stop. You are obstructing security and defence personnel. This was in the media. All this should stop…There has to be a balanced approach,” a Bench led by Justice AM Khanwilkar had said.

The Bench was hearing Kisan Mahapanchayat’s plea seeking directions to the Centre, Delhi Lt. Governor and Delhi Police Commissioner to allow them to hold dharna at Jantar Mantar in the capital.

Both the matters are listed for hearing on Monday.

Maintaining that “democracy and dissent go hand in hand”, the top court had on October 7, last year ruled that roads and public spaces can’t be blocked indefinitely and demonstrations expressing dissent have to be in designated places alone.

The top court had on August 23 asked the Centre and governments of Uttar Pradesh and Haryana to find a solution to the blockade of roads connecting Delhi with NCR towns by farmers agitating against the three farm laws.

The farmers have a right to protest at a designated space, but they can’t block the traffic, a Bench had said. “The solution lies in the hands of the Union of India and state governments...Mr Mehta what is happening? You have to find a solution, they might have the right to a place to agitate, but the roads can’t be blocked like this.”