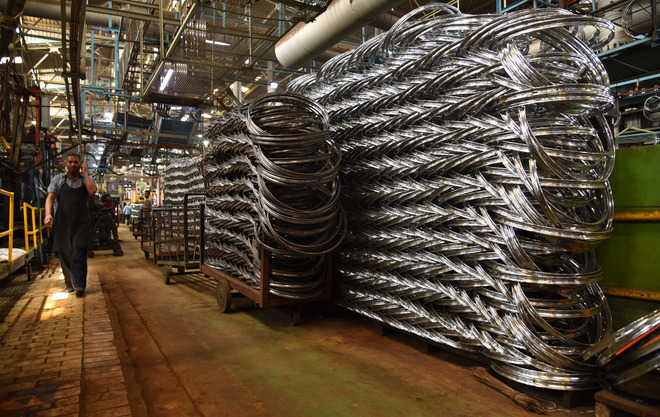 To facilitate the industrial units in the state in retaining their employees, Haryana on Friday notified its Micro Small and Medium Enterprises (MSME) revival scheme under which 100 per cent interest benefit on loans, availed for payment of employees’ wages and other expenses up to a maximum of Rs 20,000 per employee, will be provided by the government.

A decision in this regard was taken by Haryana Cabinet that met under Chief Minister Manohar Lal Khattar yesterday, but a notification of the scheme has been issued today.

TVSN Prasad, Additional Chief Secretary, Finance Department, Haryana, said he was confident that the scheme will catalyse the revival of the industry in the state.

The interest benefit will be limited to the interest paid by the industrial unit to the bank or financial institution up to a period of six months.

The benefit will be calculated at the rate of interest of maximum 8 per cent or actual rate charged by the bank.

For eligibility, the industrial unit should have been in commercial production for at least 80 per cent of days between February 1 to March 15 and it should have a running account of term loan or working capital loan from a commercial bank or financial institution.

The application for the grant of interest benefit has to be submitted to Director Industries and Commerce on web portal of the department within three months of the end of lockdown period or September 30, whichever is later.

It will be examined by an officer of the rank of Joint or Deputy Director of industries department, said the notification.

The budgetary provision for the scheme will be made from the funds available in Labour Welfare Fund. The government would directly pay to the banks.

While thanking the state government for the gesture, Rajive Chawla, Chairman of the Integrated Association of Micro, Small and Medium Enterprises of India, Faridabad, said that one thing was not clear from the notification as to how much loan the interest subsidy will be provided.

“It should be made clear whether it is for six months salary or it is interest for six months on loan for salary for one month. In the latter scenario, the support is too meagre,” Chawla said.

Rakesh Chhabra, President of Rai Industrial Association, said that rather than complicating the things, government should provide straight relief to the industry, as otherwise the benefits will go in official corruption.

“It is easier to know the number of workers hired by a company from its ESI returns. For smaller units with no ESI returns, their workers strength during the past three months can be taken into consideration,” said Chhabra.