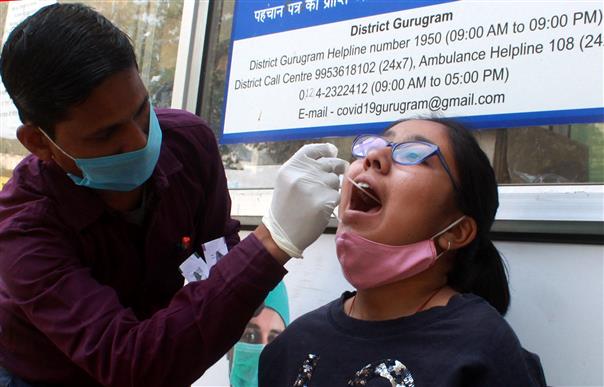 Haryana’s weekly number of fresh Covid-19 cases has jumped by 28 per cent in two weeks in February giving rise to the worries of a fresh wave in the state after 12 weeks of downward trend in infections.

The state saw 684 new cases of Covid-19 infection in the week from February 15-21 against 534 in the first week of the month (February 1-7), registering an increase of 28 per cent in a fortnight.

The increase is 11 per cent from 615 new cases recorded in the second week of the month from February 8-14.

Ever since the number of new cases started falling in November 2020 after hitting a weekly high of 17,426 between November 16 and 22, it is for the first time that the cases have started increasing again.

With new cases showing an upward trend in neighbouring Punjab with warnings of mutant strains, the surge has given rise to fears that Haryana could witness a fresh wave of the virus in the coming days.

During the peak of Covid-19 in November last year, Haryana was, on an average, conducting 35,000 tests per day.

As per the ‘Weekly Status Report’ issued by the Haryana Health Department for the week ending on Sunday, the state has a capacity of testing 24,350 samples in the labs set up in government medical colleges and hospitals, while 65,900 samples can be tested daily in various private laboratories in the state.

Rajeev Arora, Additional Chief Secretary, Health and Family Welfare Department, Haryana, however, said it would be too early to conclude that a new wave of the infection has arrived, but at the same time, he cautioned people not to lower their guard.

“Virus does not know geographical boundaries of the states. Since our neighbouring state Punjab is witnessing a surge and another wave, people need to take all precautions and follow all the protocols prescribed by the government to stop the spread of the infection,” said Arora.

Rebutting suggestions that testing has been reduced in the state, Arora said that a proper methodology was followed in collecting samples for Covid-19 and the department could not forcibly conduct tests on people.

“When we had a sample positivity rate of 10 or more, people were coming forward for getting themselves tested in large numbers. Now, when the positivity rate is 0.6 or even lesser, it is natural that fewer people will feel the necessity of getting them tested for Covid-19,” he said.