Hisar school students prepare for exams at dharna site as all teachers shifted from school : The Tribune India 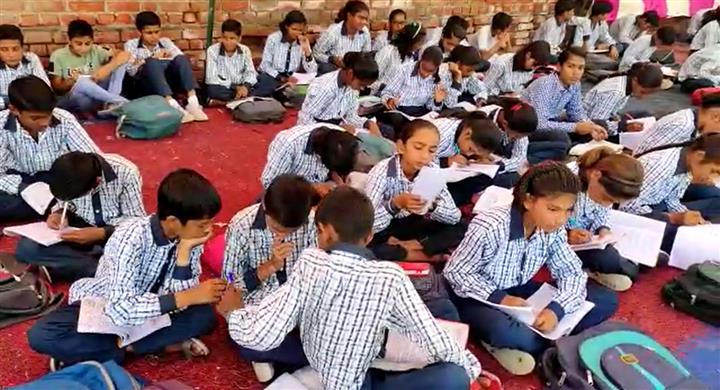 Students at a protest site in Faridpur village, Hisar, on Thursday. Tribune photo

Students of the Government High School at Faridpur village of the district are preparing for their mid-term examinations, beginning September 29, while sitting on a dharna. They have been protesting the transfer of all teachers from their school.

The school has 102 students enrolled in Classes VI to X and has a sanctioned strength of 11 teachers. Students said they had seven teachers – six regular ones and one guest teacher. However, all the six regular teachers were transferred from this school in the online teachers’ transfer drive earlier this month. The lone guest teacher left, too, was transferred from the school two days ago. Now, the school has one computer operator, a laboratory attendant and a clerk.

Muskan, a student, said they started the dharna on September 3 after the transfer of all regular teachers as no replacements were made. She said they were preparing for their mid-term examinations on their own and were trying to help each other as there was no one to guide them. She said the examinations were set to begin from September 29.

Karamkesh Singh, a villager, said they had met the local MLA, Anoop Dhanak, who is Cabinet minister in the state government, and apprised him of the situation in the village school. “However, so far, we have not heard a word from him over the issue. We have been staging a dharna in the village but if teachers are not deployed here, we will intensify the stir,” he said.

Another villager, Kartar Singh, said the villagers had raised the school with their own donations on the village common land several decades ago to ensure education to their children. “It is unfortunate that now we have to sit on dharna to demand the deployment of teachers. These students belong to poor families and their future is at stake,” he said.

“The teachers are being transferred to Yamunanagar district which is the home district of the Education Minister in schools where there are only 10-12 students. Schools with a good strength of students are being made to suffer,” alleged a villager.

District Education Officer (DEO), Hisar, Kuldeep Sihag said they had sent the details of the school and some other schools which were left with just one or two teachers after transfers to the head office. “The higher authorities have taken note of the problem and will soon resolve the issue,” he said.