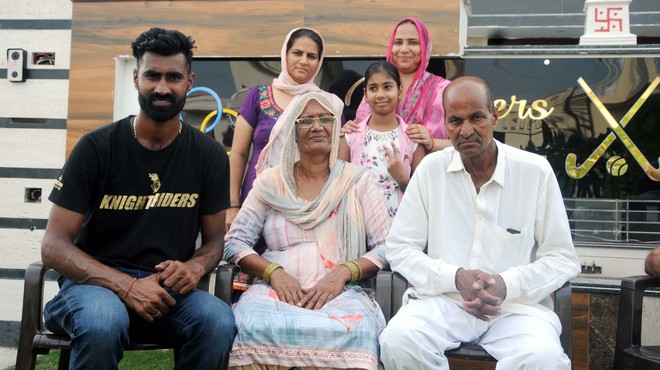 Hockey player Surender Kumar’s family in a jubilant mood at their home in Kurukshetra. Sayeed Ahmed

As the Indian men’s hockey team registered a memorable win to claim the bronze medal by defeating Germany 5-4 at the Tokyo Olympics, celebrations erupted at defender Surender Kumar’s house here.

Our financial condition was so bad that we were not in a position to even buy a hockey stick. Then, a friend’s father, Purushottamji, who used to motivate us, gave us a hockey stick. — Narender, Surender’s brother

Today, everyone is celebrating the win, but there was a time when the family didn’t have enough money to even buy a hockey stick for Surender and his elder brother Narender.

Narender, who is also a hockey player and plays for various clubs, said, “It was 2004-05 when we used to see other players playing hockey. It was a new game for us so we decided to start playing. We requested the coach there, but our financial condition was not very good and we were not able to buy even a hockey stick. Then, a friend’s father, Purushottamji who used to motivate us, gave us a hockey stick. The only things we had at that time were our hard work and struggle. But after we both got jobs in 2012, the situation improved.” Surender works for FCI in Delhi.

Besides financial conditions, Covid also tested the determination of the Indian team’s defender. Last year, Surender (27) tested Covid positive and even had to face post-Covid complications. Surender had developed pain and swelling in his right arm due to blood clot. He had to take rest from the game to recover.

Today, while everyone was watching the match closely, Surender’s parents were out of their house as they don’t watch him playing live.

His father Malkhan Singh said, “I am a farmer having five-acre land and have no specialisation in any other field. But I wanted my children to be successful. So we moved from Brana village in Karnal to Kurukshetra to provide better education and life to them. Our financial condition was not good and we had no money to buy a hockey stick. Today, I have forgotten all our sorrows. I don’t watch matches as it gets tense and I become nervous.”

Surender’s mother Neelam Devi said, “I also don’t watch him play as I get tense. After they lost in the semifinals, I talked to him and he was confident of winning bronze.”

Minister of State for Sports and Youth Affairs Sandeep Singh, a former Indian hockey captain who also belongs to Kurukshetra, said: “They have created history. It is a big day for all of us.”