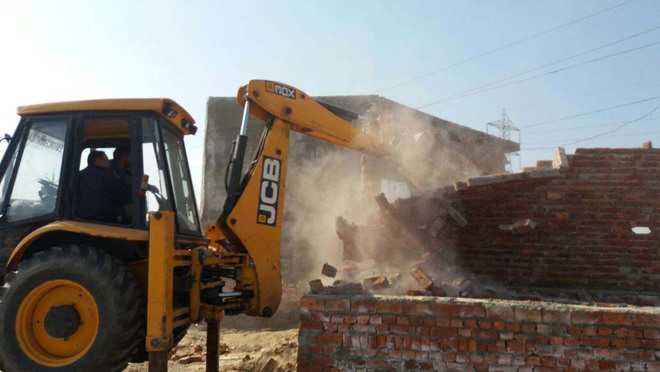 As part of an ongoing drive to demolish properties which are proceeds of crime, a team of Municipal Corporation, Manesar (MCM), razed a four-storey house of gangster Sube Gujjar in Bar Gujjar village today.

“The house was not just Sube’s property. We also had a share in the house that has been completely razed without any prior notice by the authorities. We will challenge it in the court,” said Ravi, one of the family members of the gangster. Sanjay Singh, DTP, MCM, said the house was illegally built on the village agricultural land. The boundary wall of the house, built in about three-and-a-half thousand square yards, was demolished on Thursday.

“After the house was vacated, we resumed the demolition process again today. No approval or licence was taken for change of land use from the official department for the construction of the house. We served a notice earlier and the action has been taken as per the act,” added Singh.

In the presence Duty Magistrate Naveen Dhankhar, Executive Engineer, MCM, more than 150 cops led by ACP Manesar Suresh Kumar and two JCB machines, the process of demolition began. After eight hours, around 3 pm, the demolition was complete. Omwati, another family member, said the house was built ten years ago when there was no corporation to deal with the matter. The land still fell under Lal Dora and they had not given any such notice, she added.