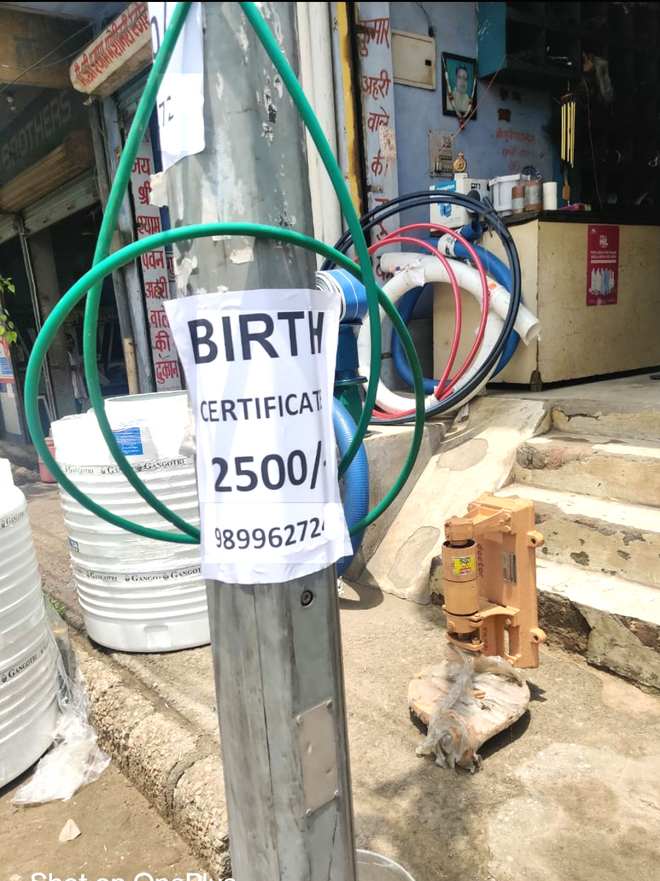 A poster pasted on an iron pole in Jhajjar. Tribune photo

Posters asking people to get birth certificate for Rs 2,500 have come up in Jhajjar city. The district health authorities are suspecting the role of a private agency in preparing ‘fake’ birth certificates and have decided to lodge a police complaint in this regard.

In a similar incident, two FIRs were recently registered in Gurugram and Kaithal districts for “hacking” the official account of the Register (birth and death) for issuing fake certificates.

Using the Registrar’s login ID, fraudsters issued 20 fake certificates in Kaithal and 14 in Gurugram. A health official said similar posters were found pasted in the city last month too, but the cellphone number mentioned on them was different at that time.

“I dialed the number mentioned on the poster and the call was received by a woman. She sought the Aadhar Card number of the person concerned with an advance fee of Rs 1,000 to get a birth certificate made from Delhi. She informed Rs 2,500 is charged for the child aged less than 5 years, Rs 4,500 for minors and Rs 8,000 for those above 20 years and above,” he added.

She sought advance payment through Paytm and asked to pay the remaining amount after receiving the certificate.

Jyoti Nagpal, Civil Registration Assistant, said she learnt about the posters today and informed the higher authorities. “A meeting is likely to be held tomorrow to discuss the issue and take further action in this regard,” she added.

Dr Sanjay Dahiya, Civil Surgeon, said the Deputy Civil Surgeon (birth and death) had been asked to look into the matter.