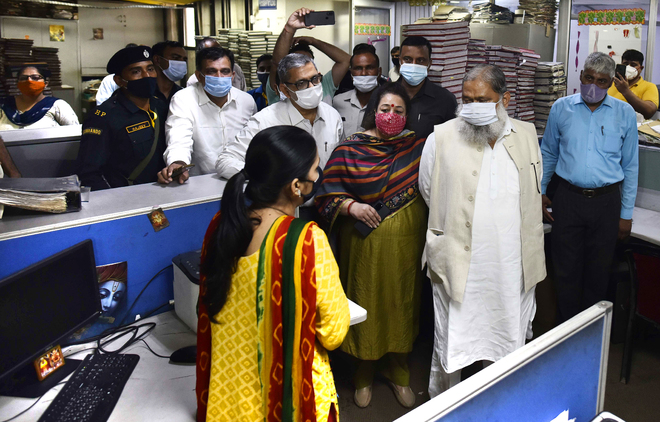 Minister Anil Vij during a raid at the Gurugram MC office on Thursday.

From checking random files to going through pending complaints, Vij took all officials to task for alleged irregularities. He also warned MC Commissioner Mukesh Kumar Ahuja, whose empty chair’s picture was clicked by him, for not being available at the office. The minister relieved an XEN and ordered registration of an FIR against another for negligence in work.

In the surprise check, Vij reached the corporation headquarters in Sector 34 here in the morning. Many Joint Commissioners, including the MC Commissioner, were found absent from the office at 10.25 am. He inspected the offices located on the three floors of the corporation and ordered the suspension of two SDOs Rakesh Sharma and Kuldeep Yadav, who were found absent. In a case of a six-month-old estimate, XEN Dharambir Malik was instructed to be relieved of the said charge.

Vij also instructed to deduct two-hour salary of the account branch’s officer Bhupendra Singh. Besides, orders were also issued to take action, as per rules, by registering an FIR against XEN Gopal Kalawat, who allegedly tried to mint crores on the basis of fake satisfaction letters of councillors.

During the inspection, dissatisfied with the functioning of the officers and employees, the minister said a report of the work done by all employees and officers till July 20 should be sent to their office. — OC