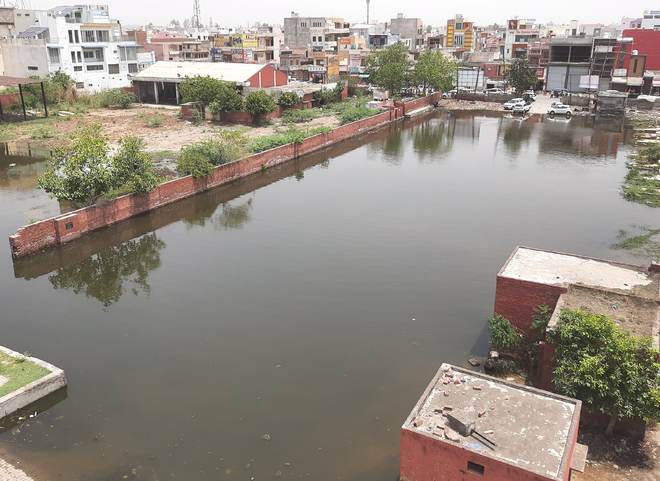 The Old bus stand premises where shopkeepers and customers park their vehicles in Jhajjar.

The old bus stand site in the town has been submerged in rainwater for the past several days forcing commuters to park their vehicles on the road, which often leads to traffic chaos. Moreover, It has also become a breeding ground for mosquitoes posing health threat to people residing in nearby localities.

The bus stand was shifted to the Rohtak road around five years ago. Since then, the site has been lying vacant. The municipal authorities chalked out a plan to turn it into a vendor zone but it did not materialise. Later, the shopkeepers and customers started parking their vehicles over there.

“The site has been waterlogged for the past two weeks but the authorities are yet to drain out the water. The situation is leading to traffic congestion as customers now park their vehicles on the road. This has also become a favourite place for anti-social elements,” said Rajeev, a shopkeeper.

Ram Niwas, a fruit seller, said odour emanating from the stagnant water makes it difficult for vendors and shopkeepers and customers to move around in the area.

“The accumulated water is leading to breeding of mosquitoes that poses serious threat to health of the people. We will call on the Subdivisional Magistrate if the water is not drained out soon,” said Ishwar Singh of Garhi Mohalla.

Karamvir, another resident, demanded that a park be developed there to redress the issue permanently. Arun Nandal, Executive Officer, Jhajjar Municipal Council, said the site belonged to the Haryana Roadways so the council had nothing to do with it. “The plan to turn the site into a vendor zone has not yet got the approval from the higher authorities,” he added.

Ravinder Pathak, General Manager, Jhajjar Depot (Roadways), said the Municipal Council authorities would be requested to drain out the accumulated water while a plan was also being chalked out to transfer the premises to any other government department so as to ensure its optimum use.