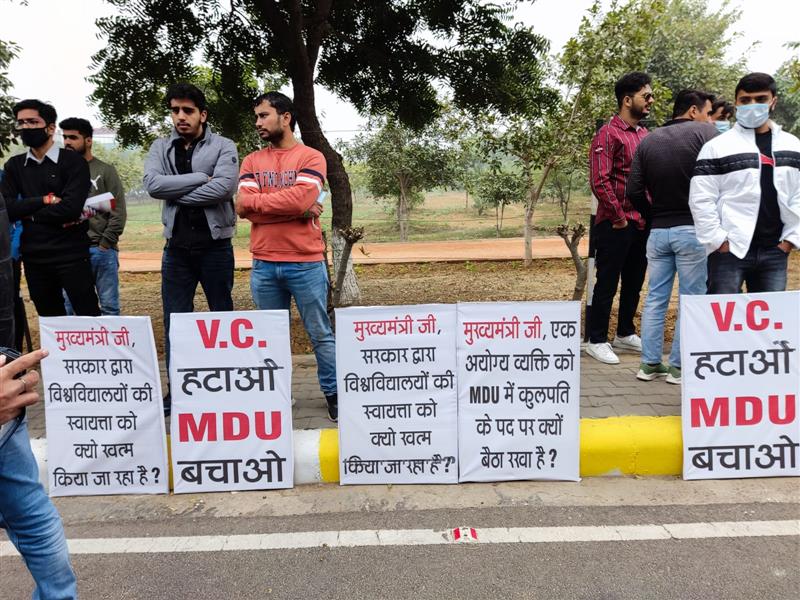 INSO activists protest at the MDU in Rohtak.

The student wing of the Jan-nayak Janta Party (JJP), an ally of the ruling BJP in Haryana, staged a protest demonstration prior to the visit of Chief Minister Manohar Lal Khattar to Maharshi Dayanand University (MDU) in Rohtak on Thursday.

Tight security arrangements have been made on the university campus in view of the proposed protest demonstration during the Chief Minister's visit.

It has also demanded a high-level inquiry into the qualifications of MDU Vice Chancellor Rajbir Singh, alleging that he is not qualified to become a professor or vice chancellor.

"We seek withdrawal of the Haryana government's notification regarding appointment of university staff through HPSC and HSSC which threatens the autonomy of the state universities. We also demand a thorough probe against the Haryana Higher Education Council chairman and the vice chancellors of other state universities," said INSO president Pradeep Deswal.

He maintained that their demonstration would be democratic and peaceful.

The Haryana Federation of University and College Teachers Organisations (HFUCTO) as well as the association of non-teaching employees of the state universities have also opposed the move regarding appointment of universities' staff through HPSC and HSSC.

"We will join the associations of university teachers and non-teaching employees if they stage a protest demonstration during the Chief Minister's visit," said Deswal.

CM Manohar Lal Khattar is slated to inaugurate the renovated Dr Mangal Sen Indoor Gymnasium Hall and lay the foundation of a kabaddi hall on the MDU campus on Thursday.